The island character of this town make you forget that Preveza is in fact on the mainland of Epirus. Its lacy shores and blue sea blend seamlessly into the lush, green landscape. Preveza, according to one etymological theory, got its name from the Slavic word “perevoz” which means “crossing”; it is true that this port of Epirus served, in the past, as a bridge in the communications between Greece and Italy and, also, between the regions of Epirus and Sterea Ellada (Mainland Greece). 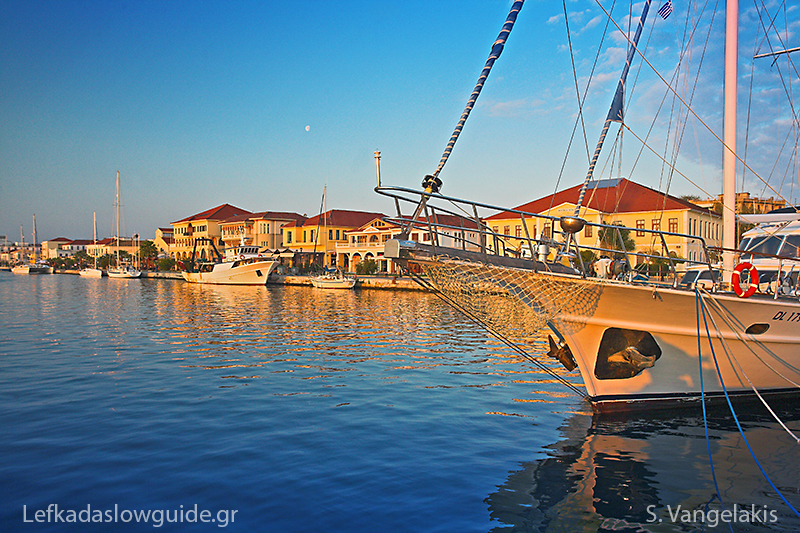 Preveza is an original, unspoiled town, noble and multi-faceted; the first thing visitors perceive when they arrive is its happy, urban character. However, its long history of glorious times interchanged with those of senseless bloodshed in the hands of conquerors becomes evident as you walk around it. 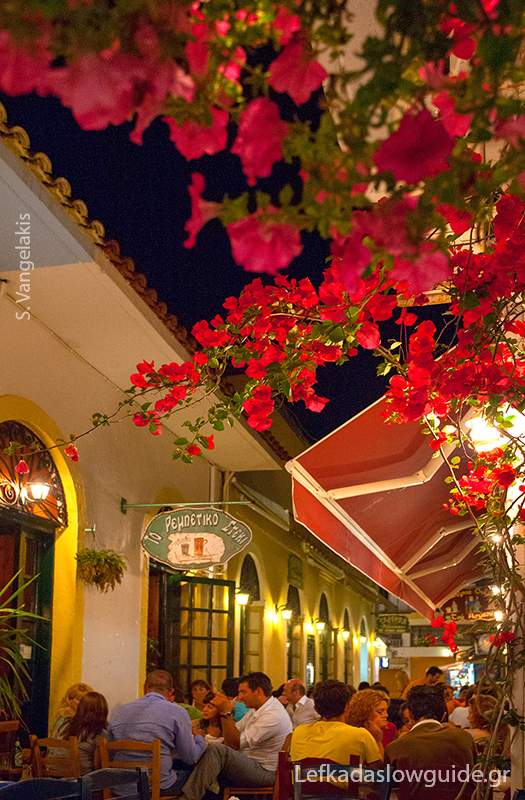 The best way to begin your acquaintance with Preveza is by taking a casual walk around the port passing by the majestic 19th century neoclassical buildings right on the seafront. On the right-hand side you will find coffee shops and traditional tavernas well worth a stop especially if you are looking for a cool spot on a hot summer’s evening. Let your steps lead you along the town’s narrow, paved streets, where the smell of jasmine prevails. Visit the interesting churches, like Agios Athanassios, with the elaborate ornamentation, or Agios Charalambos, right next to the Clock Tower. Go to the Castle of Agios Andreas and the Almighty, to get a small taste of the city’s century-long history and to admire the glorious colours of the sunset. 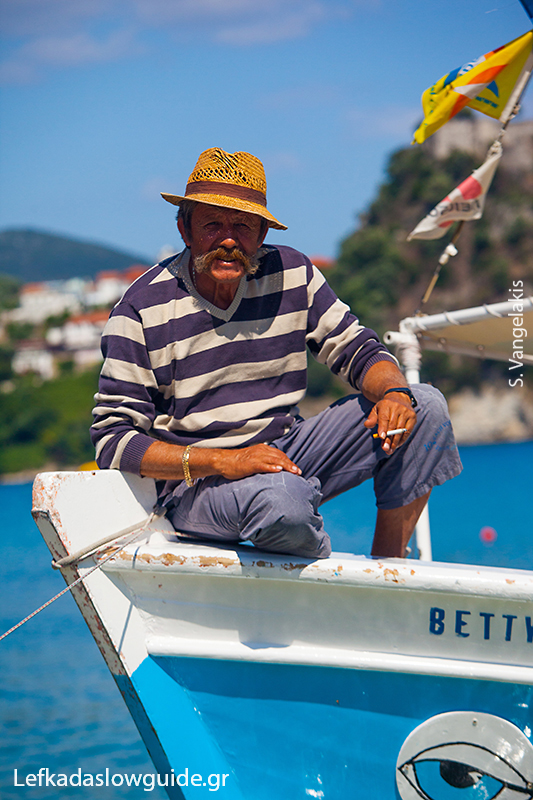 Before leaving Preveza to visit the archaeological sites in the area around it, make sure you have tasted the local cuisine, seafood, succulent prawns and delicious fish straight from the Ambracian Gulf. 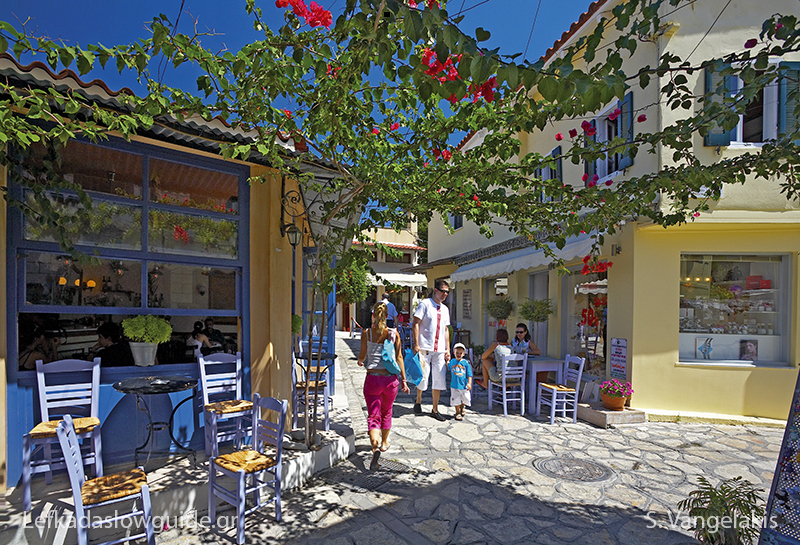 The city’s heart beats in Saitan Pazar, the market in what used to be the town’s commercial centre. The legend about how it acquired its name is interesting: the town’s Turkish administrator had a nasty fall while riding his horse down the main street because the town’s inhabitants had rubbed soap over the cobblestones. He cursed the cobbled road calling it “Saitan Pazar”, the Devil’s market. Plan for a short break in the town’s coolest spot to taste the delicious meze served at any one of the traditional ouzo-taverns. Across from the ouzo-tavern bearing his name is the house that hosted the famous Greek poet Kostas Karyotakis during his 32-day stay in Preveza. 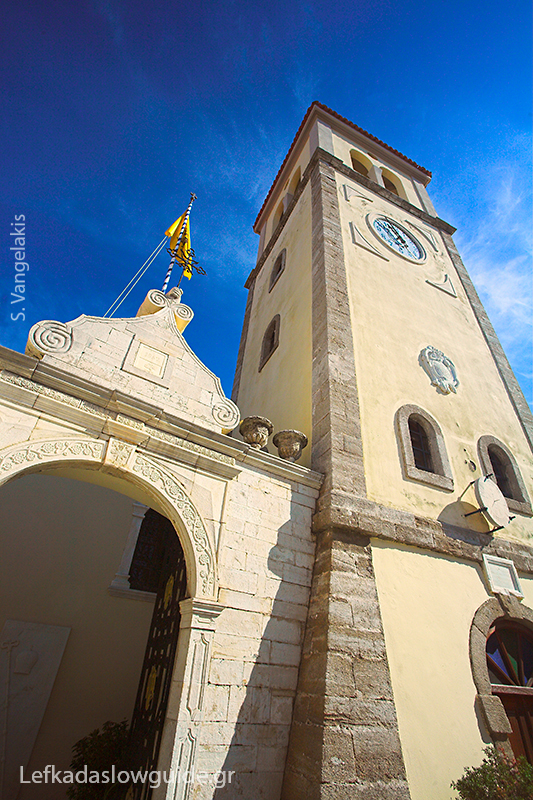 The Clock Tower, right next to the Metropolis of Agios Charalambos, is a point of reference in Preveza. Also known as the “Horoskopio” the tower was erected towards the end of the 18th century and is a typical example of Venetian architecture. The crown on the top of the tower and the belfry were added at a later date.

Museum of the Sea Battle of Aktion

Make a stop at the Museum dedicated to the famous Sea Battle of Aktion that is situated in the town’s central market. Here you will see the impressive mock-up of the battle where Octavian’s fleet fought against that of Anthony and Cleopatra. You will also see wooden models of ships and watch the reconstruction of the sea battle that decided the end of the Hellenistic and the beginning of the Roman sovereignty. 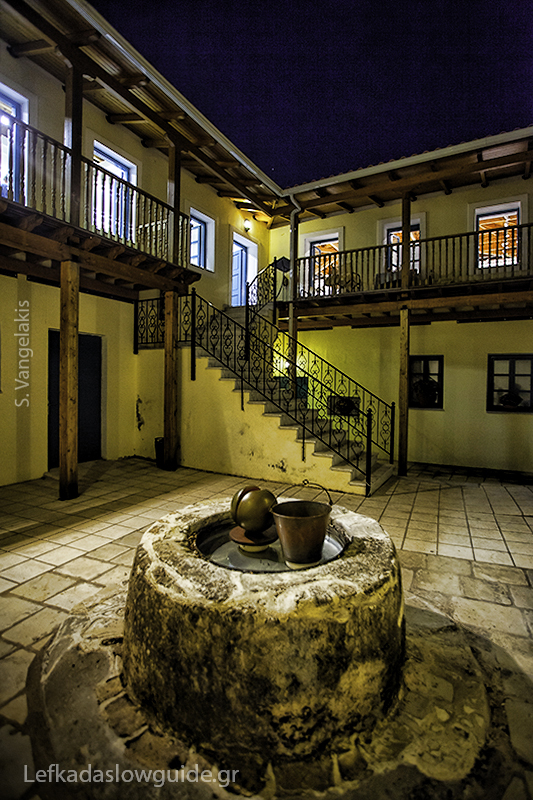 The school was named after Anastasios Theofanis, the wealthy merchant of Preveza who donated the funds for the founding of the city’s first school in 1803. The building now belongs to the Municipality and is a venue for exhibitions and cultural events.

The Monument to Love

This original monument graces the small Georgios Seferis square. It was erected by the Municipality of Preveza in 2000 to honour two local medical doctors, Dimitrios Krokos and Christoforos Tsantoulas, for their contribution to the community.

The castles of Preveza 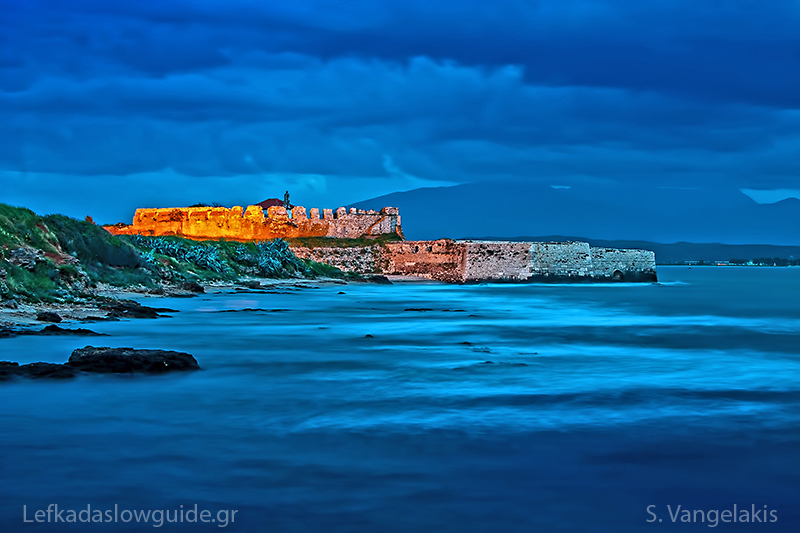 The Castle of the Almighty

Situated at Fokia to the southwest of Preveza this castle was commissioned by Ali Pasha in 1807 to serve as a vantage point over marine traffic in the Ambracian Gulf. Its original name was Outz-Kale, which in Turkish means outer acropolis; it was later names Castle of the Almighty because of the Church of the Almighty that was built by the French during their brief occupation. The castle forms a canonic pentagon with tall walls on its perimeter; it consists of abutments, a bastion on the sea (from a subsequent phase of its construction), a dry moat on its south side and a water-filled moat on its north side. Up until 1968 the castle was used as a prison; nowadays it is a venue for cultural events. It is well worth a visit especially at sunset as the view it offers over the sea is breathtaking.

The Castle of Agios Georgios

At the southernmost tip of Preveza you will find the Castle of Agios Georgios (also known as the Yeni-Kale, the New Castle) commissioned by Ali Pasha in the 19th century, roughly at the same time as the moat surrounding Preveza was built. Its fortified compound with the slanted outer wall survives whole.

The Castle of Agios Andreas

The construction of The Castle of Agios Andreas, also known as the Castle at Kyparissi as it is referred to in Venetian documents, began in 1701 after Preveza surrendered to the Ottomans. The second, most important, phase of its construction coincides with the Venetian occupation after the Treaty of Passarowitz; in 1807 with a decree issued by Ali Pasha the castle was extended and fortified with the external wall and the moat. In the 20’s the army demolished the bulwark on the side facing the sea while the chapel dedicated to Agios Andreas was built in 1956.

The churches of Preveza 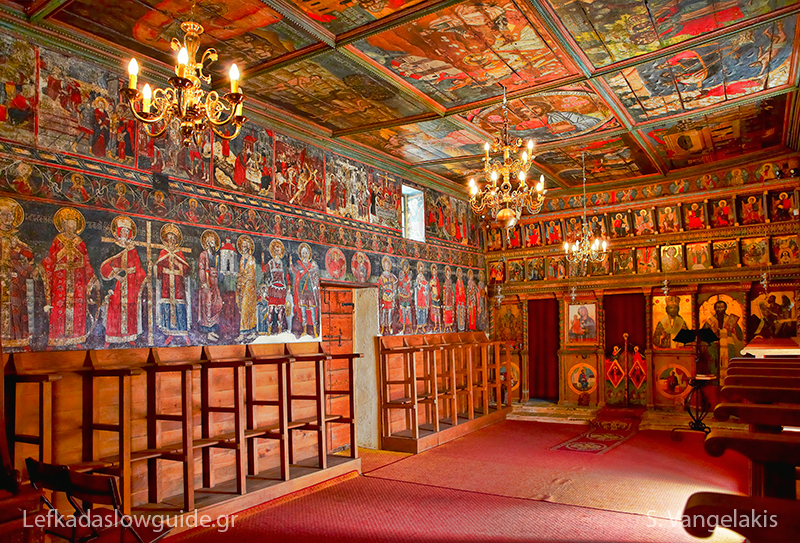 The Church of Agios Charalambos

Built in the 18th century in the exact spot where its predecessor stood, next to the Venetian clock tower in the center of the town, this church is decorated with oil-paintings of the Eptanesian School , painted by the Lefkadian iconographer Spyros Gazis, while its intricately carved , wooden iconostasis, decorated with gold-leaf, dates back to 1827.

This church was also built in the 18th century and is a single-nave basilica. The icons on the iconostasis were painted by Athanassios Karatzoulas, whereas the walls are decorated by notable icons by various iconographers. As tradition goes the crews of merchant vessels that moored in the port during the 18th century, more often than not after a dangerous journey, would give thanks at this church; this is where the nickname Mary of the Foreigners hails from.

The Church of Agios Athanassios

Another single-nave basilica with a semi-circular apse, Agios Athanassios has an impressive ceiling, a lovely carved wooden iconostasis and portable icons in the Eptanesian style.

The beaches of Preveza 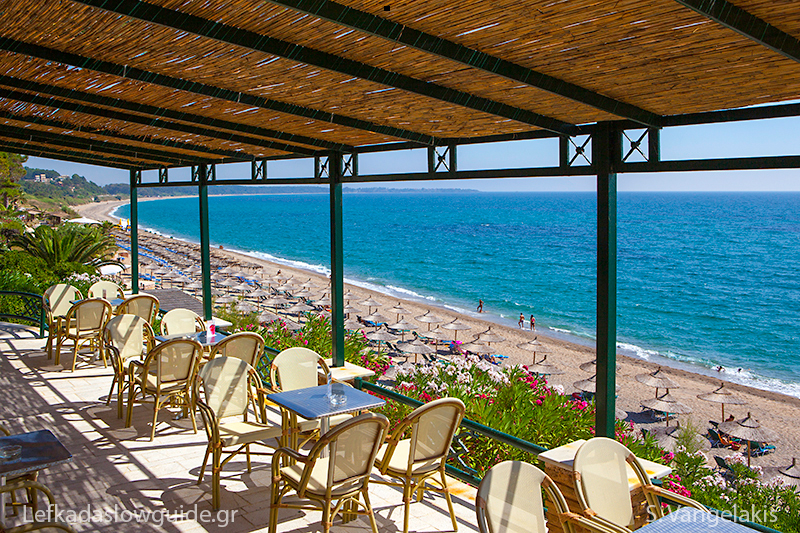 The coastline of Preveza is sixty kilometers long with coves, white beaches and pine-covered slopes that reach all the way down to the sea. Several beaches are organized while many offer ideal conditions for sea sports such as windsurfing, sailing and water-skiing.
The beach Kyani Akti (Côte d’Azur) is a sandy beach that is well protected from the wind which means the sea there is always calm. Psathaki is in the Ambracian Gulf and has warm water ideal for children. Pantokratoras, by the homonymous castle, is a great beach for underwater exploration. Alonaki beach is the ideal destination for those who are after a quiet, golden beach away from the crowds.
Monolithi beach, close to Mytikas, on the Ionian Sea, is several kilometers long and has sparkling blue waters, while a cluster of eucalyptus trees offers shade to bathers. Lygia beach at the foot of the forest offers a spectacular view while Vrachos and Loutsa beaches are ideal choices if you are looking for crystal-clear water. Kanali and Kastrosykia are organized beaches while the latter has an infrastructure for water-sports. 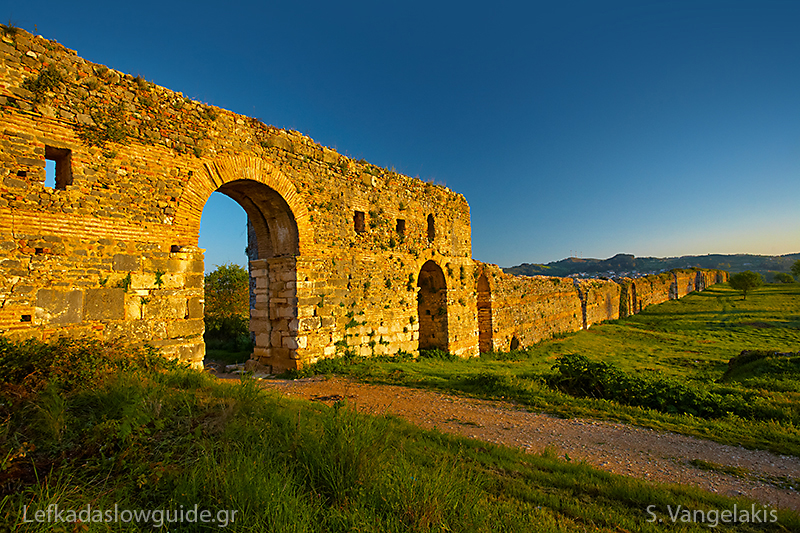 Ancient Nikopolis was an important commercial enter in antiquity and it encapsulates the rise and fall of an Empire. It was founded in 31 BC by Gaius Julius Cesar to commemorate his victory against Antonius and Cleopatra on the one hand and so that the Romans would have military control over the area on the other. The new city was inhabited by people brought here by force from nearby areas; in exchange, they were granted financial and political privileges. 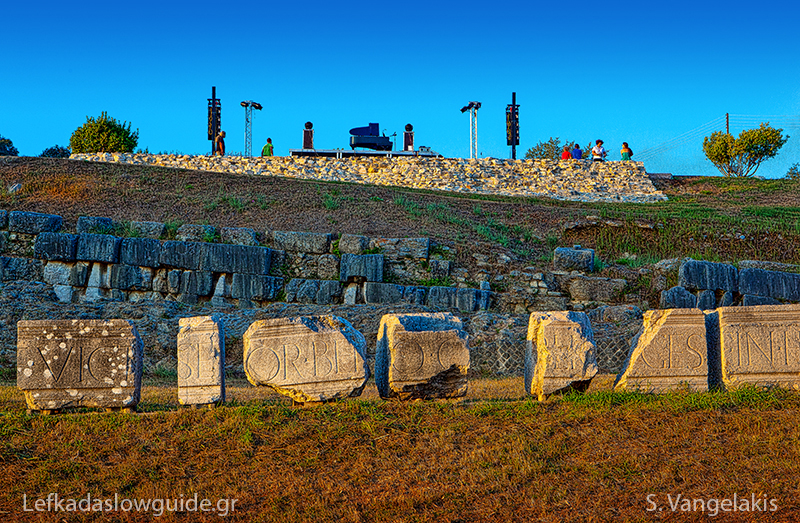 Nikopolis is, area-wise, the largest surviving ancient city in Greece, with majestic public and private buildings.Its final demise occurred between the 10th and 11th centuries after a series of raids, earthquakes and fires. Paul the Apostle probably came to Nicopolis to preach Christianity, while the stoic philosopher Epictitus arrived here in 89 AC persecuted by the Romans. 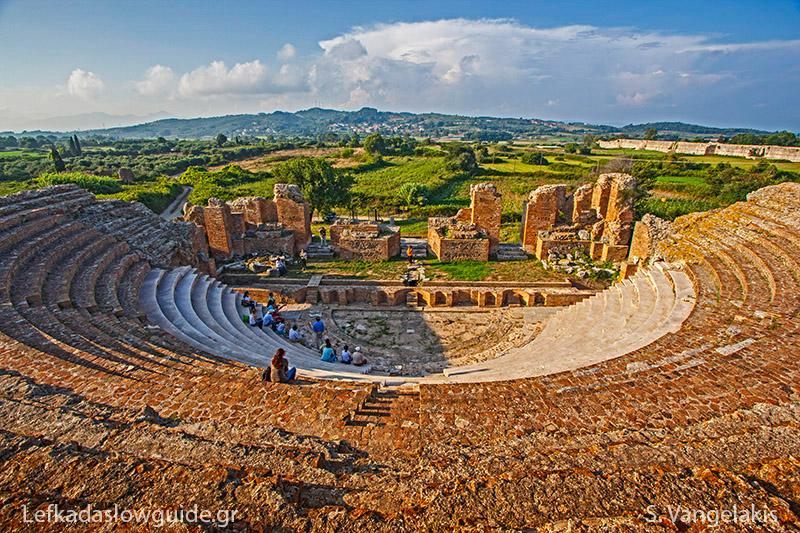 Which parts are open to the public:

The Odeon on the western side of the wall was constructed at the beginning of the 1st century AD and consists of three parts: the stage, the orchestra and the cavea (auditorium).

The Theatre operated usually during the Nea Aktia –a competition of religious character in honour of Apollo. The stage was raised, possibly two-storeys high, with three arched entrances on its façade.

The two buildings facing each other in the Nymphaion were reservoirs that supplied the locals with water; archaeological studies place the construction of these edifices at a later period than that of the foundation of the city.

The Monument of Augustus was erected by Octavian after his victory in the sea battle of Aktion and was a temple to Ares, Poseidon and Apollo of Aktion. It consists of a Pi-shaped stone base and its façade is decorated with bronze pistons (έμβολα) taken from Cleopatra’s fleet.

The Roman Aqueduct, a exceptional work of ancient technology, is 50 meters long and was constructed to carry water from the springs of the river Louros to the cisterns at the Nymphaion, using the difference in altitude.

The Northern Thermae (Bedenia), situated by the northern part of the roman walls, were the town’s public baths, consisting of rectangular and curved spaces interconnected by openings. 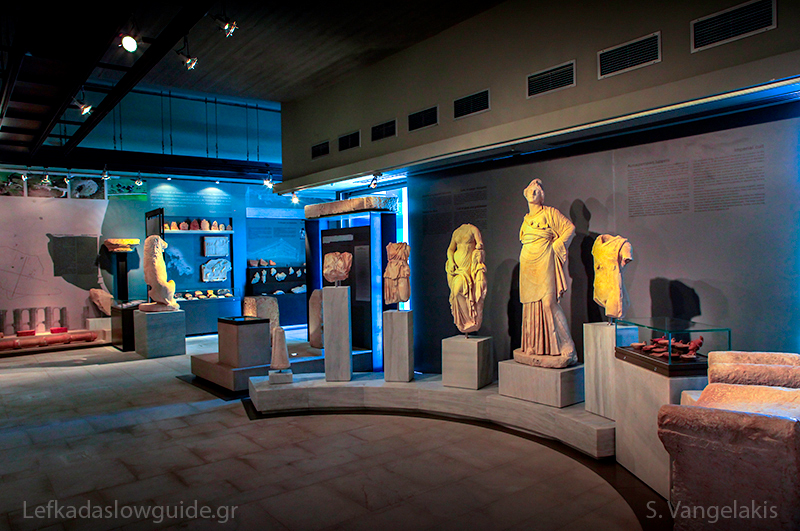 A multitude of findings exclusively from the archaeological dig in Nikopolis is exhibited in the Museum, offering visitors a panorama of the Roman city and Octavian’s victory. We recommend that you visit the Museum in combination with the archaeological site to get the complete picture. The museum has two halls housing an impressive collection of findings among which a funerary statue of a horse, a marble statue of Athena, a marble cylindrical pedestal with a relief depicting a battle of the Amazons, sarcophagi and coins. 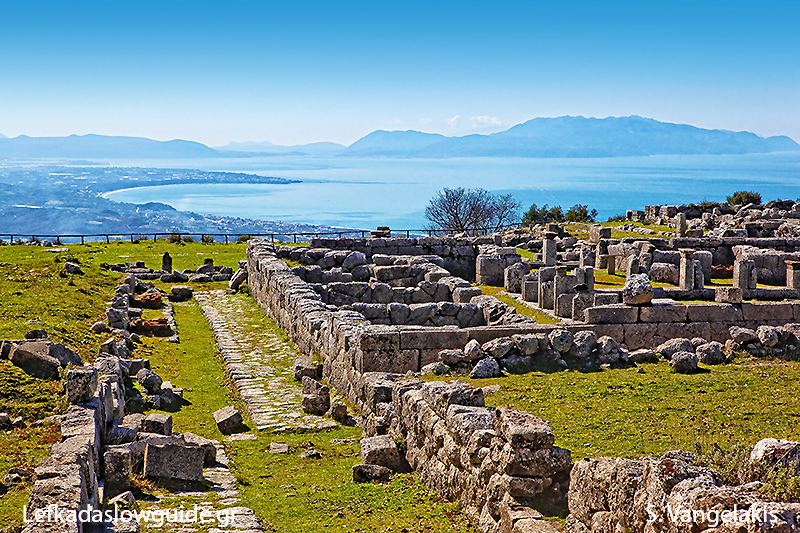 Ancient Kassopi was built by the Kassopian people of Epirus in a naturally fortified location and became a prosperous city before being destroyed by the Romans in 167 B.C. It reached the height of its prosperity in the 3rd century B.C., a consequence of the region’s highly developed farming and trade; this is reflected in the large public buildings of the town, many of which still stand. If you visit Ancient Kassopi you will have the chance to admire the Prytaneion, The House, the Odeon, the theatre, the Altar to Aphrodite and the Katagogio, all of which will give you a taste of what one of the largest, ancient Epirotic towns was like. 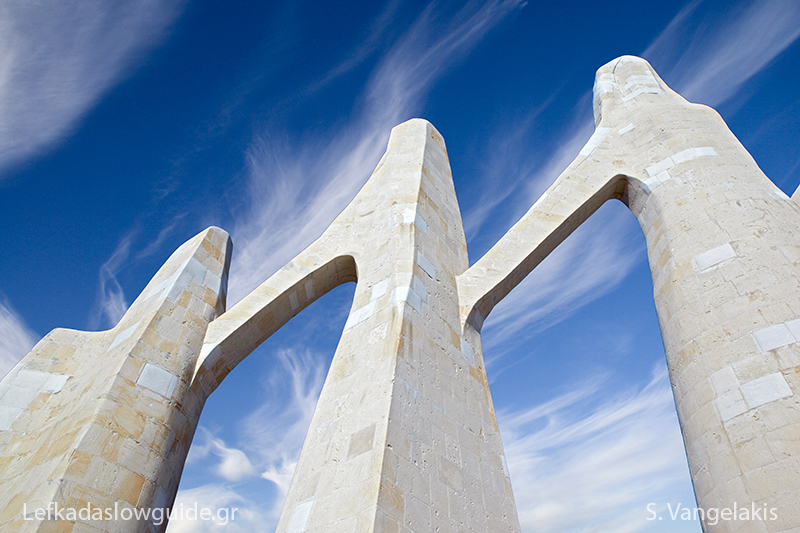 The historic mountain of Zalongo, a symbol of self-denial and heroism, looms over the village of Kamarina, to the north of Preveza. Zalongo is inextricably bound with the mass suicide of the women of Souli and their children who danced of the edge of the cliff into the abyss below to escape from the Turks in the days before the start of the War of Independence. A huge sculpture, standing at 13 meters tall, created by sculptor Zogolopoulos and architect Karantinos, was erected at the top of the cliff in 1961 commemorating their heroic sacrifice.