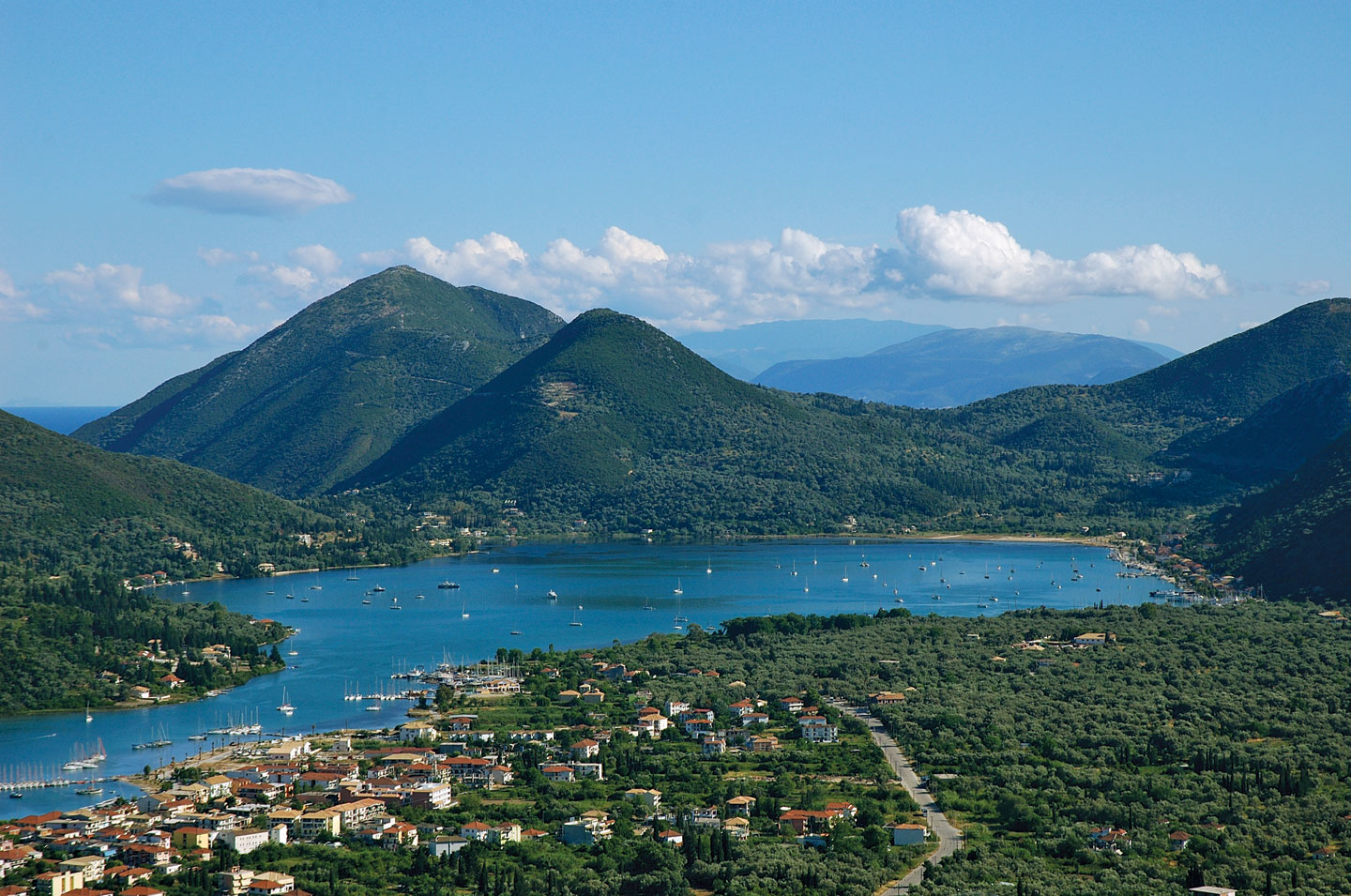 The village of Vlycho, 3 km south of Nydri, is in the traditional architectural style with a view over a beautiful bay. On leaving Vlycho there is a sign indicating left for Geni along a road through olive trees. The carriage road comes to an end at some point, and from there a picture-book footpath leads to the church of Agia Kyriaki built on a hill at the site of the ancient sanctuary of the Nymphs. The grave of the German Archaeoligist Wilhelm Dorpfeld is in the vicinity. The unruffled sea, paradisal little islands, Nydri and the tall mountains covered in lush green overlooking it. 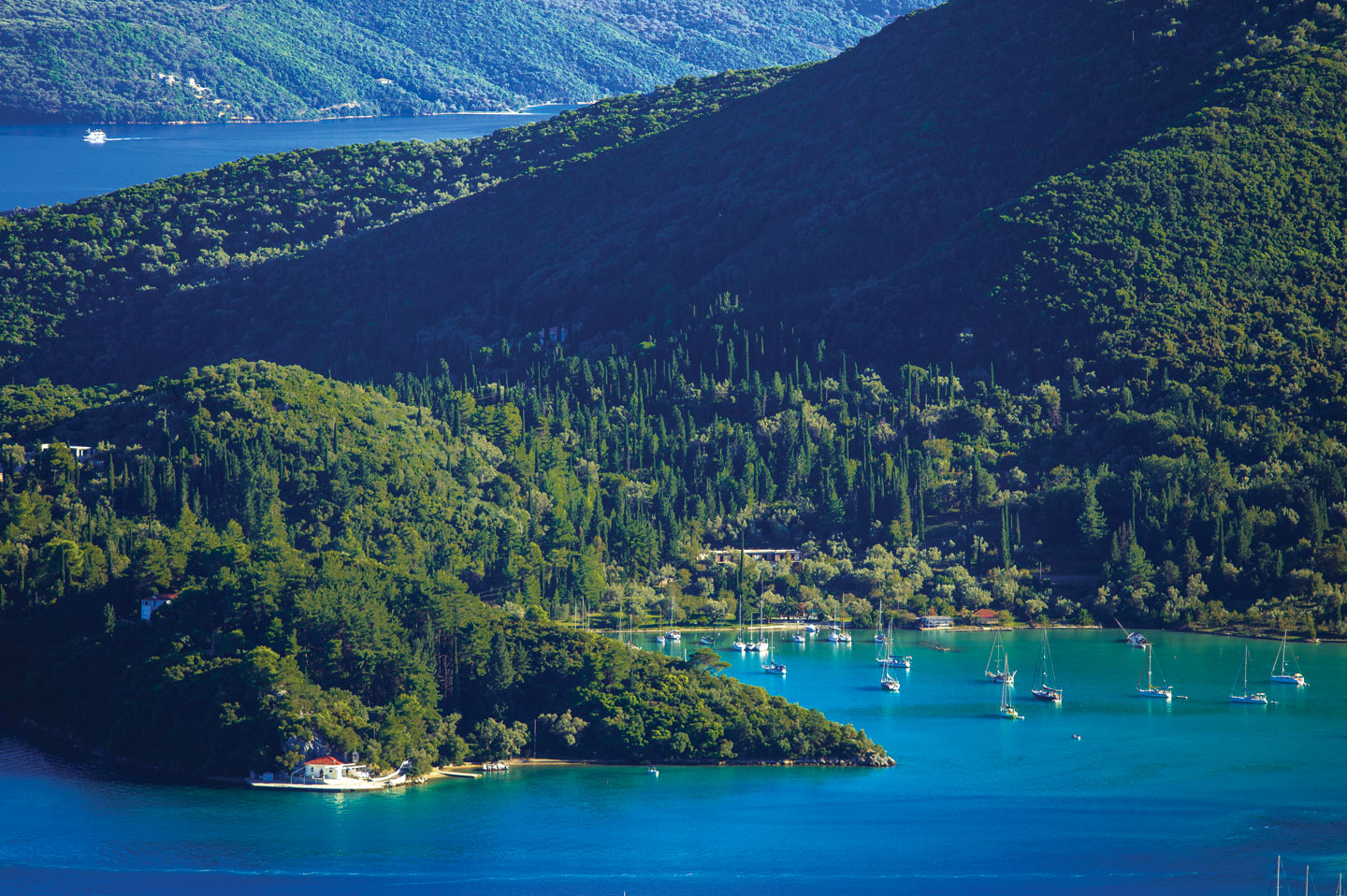 On the road back, there is another sign pointing left to Dessimi Bay. If you are there in the daytime, you will have an unforgettable swim in the emerald and always calm and clean waters of the cove, with Meganissi opposite in the background, or, about 2.5 km further, there is another lovely and unfrequented beach at Fteri, but drive carefully on the dirt road. If you want a bite to eat after your swim, we suggest returning to the area of Geni to enjoy a meal at one of the restaurants next to the sea.

Then, we return to Vlycho to continue our route. Detour: A short way past Vlycho you can turn off to go up to Katohori. In the past, this was the main village of the area and the municipal seat. It is worth taking the trouble to visit the remarkable churches and the stone-built houses and especially the church of Agios Charalabos for its 16th century frescoes.

Read more: Nydri, Lefkada: The cosmopolitan village that will astound you

The islets of Lefkada

From Lefkada town, set off towards Nydri - Vassiliki. Passing through the villages of Kalligoni, Karyotes, Lygia, Nikiana, Perigiali in succession, you reach Nydri village. This is the most cosmopolitan part of the island. Once a quaint fishing village, it is today the destination of most tourists for their stay. There is a choice of modern hotels, rooms to let, restaurants and bars and organized summer sea sports and sailing, visits to the islets just offshore, as well as trips to the islands of Ithaca and Kefallonia. 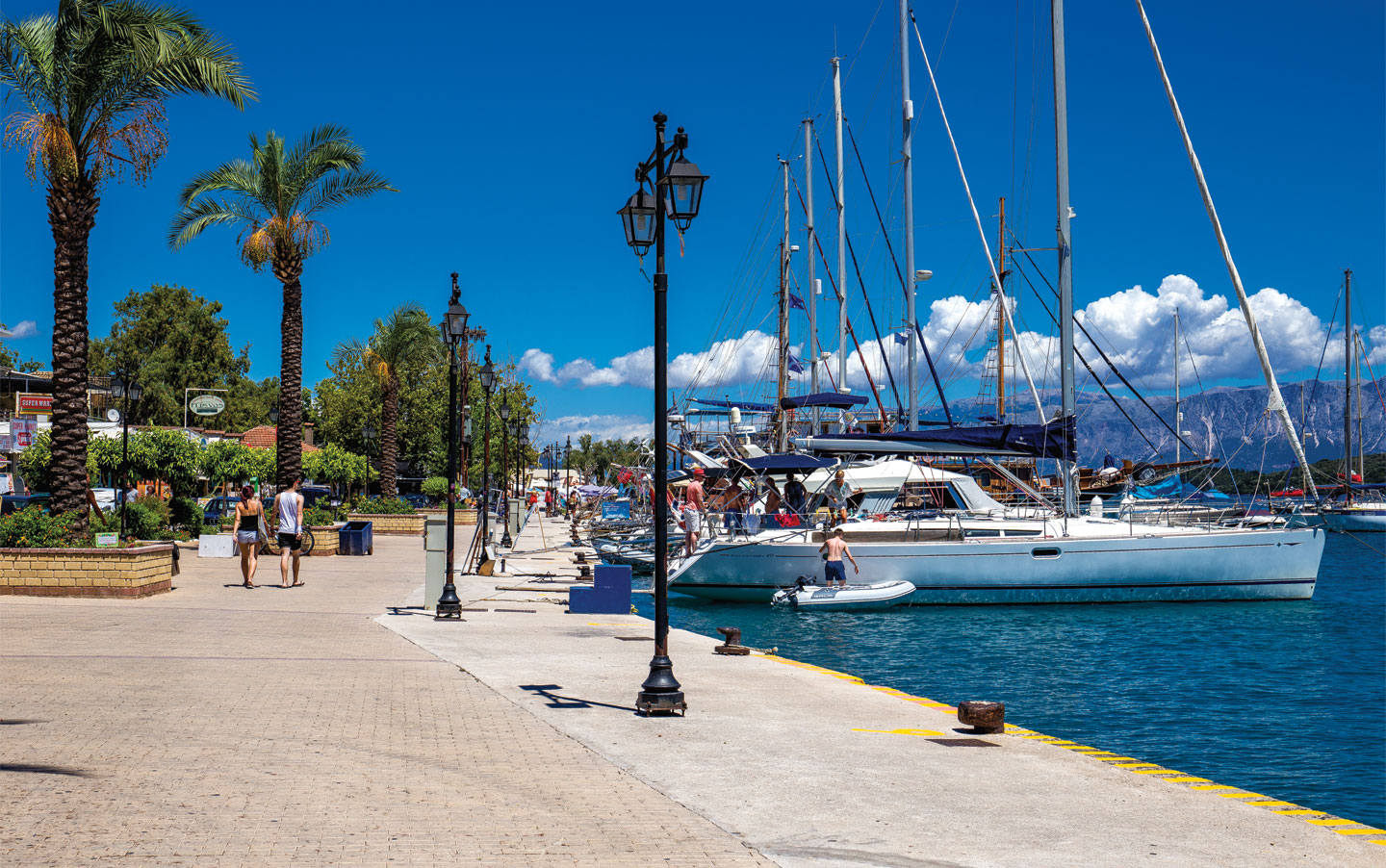 The Pringiponissia rise out of the bay in front of Nydri, the ‘Prince Islands’, shoulder to shoulder, and with the promontory of Agia Kyriaki forming an archipelago configured like a fjord. They are certainly worth a visit. In the harbour, you can board one of the many little boats making daily cruises or rent a small boat or speed boat to explore them alone. The islands closest to Nydri, from west to east are: Sparti, Cheloni, Madouri, Skorpidi and Skorpios. 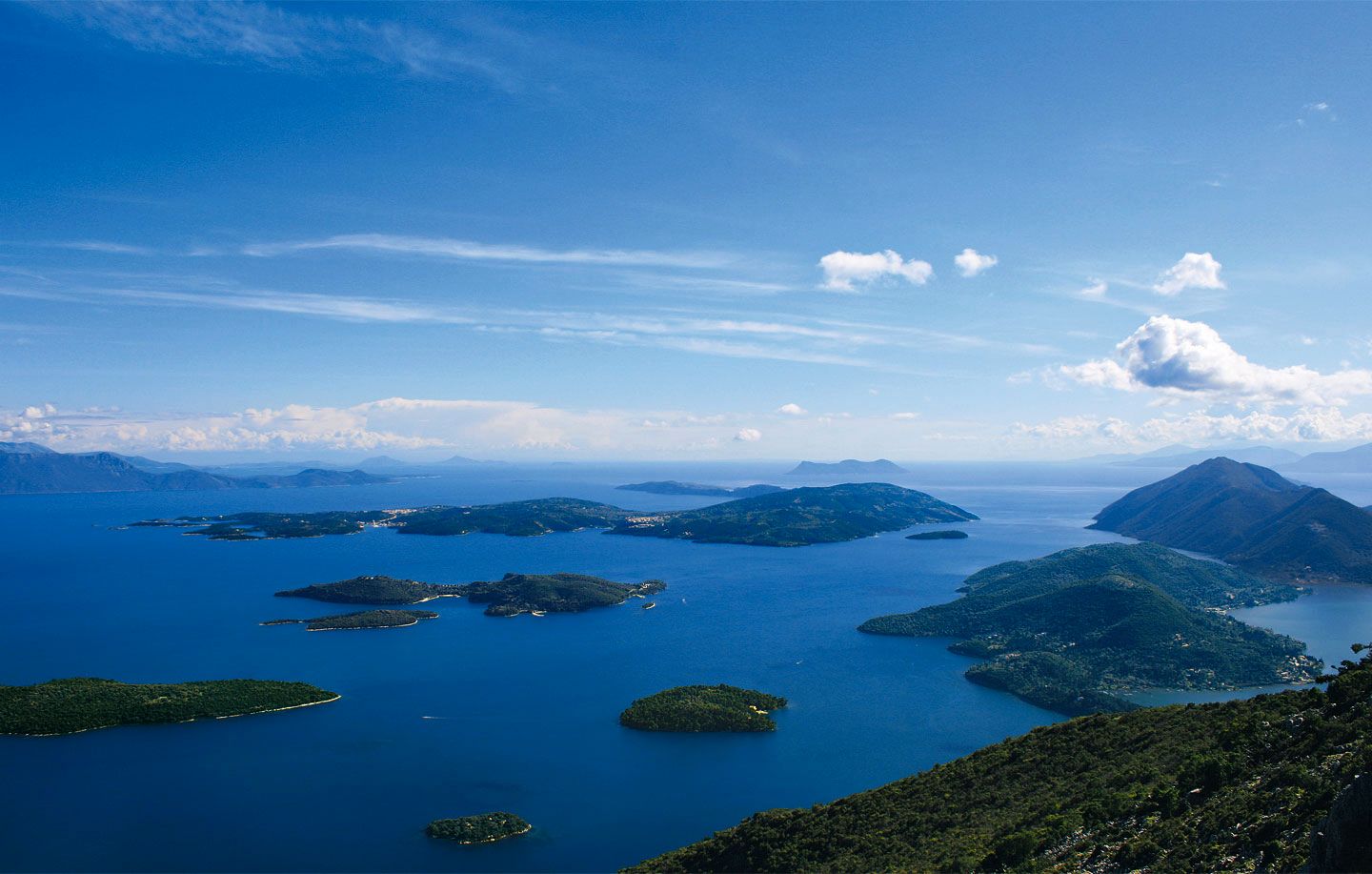 Each has a history. Onassis had purchased the small island of Sparti, too, in 1963 from the Stavros family, the oldest family on the island. Next to Sparti, close to the mainland, there is a small round and rocky island covered in olive trees, called Chelonaki. 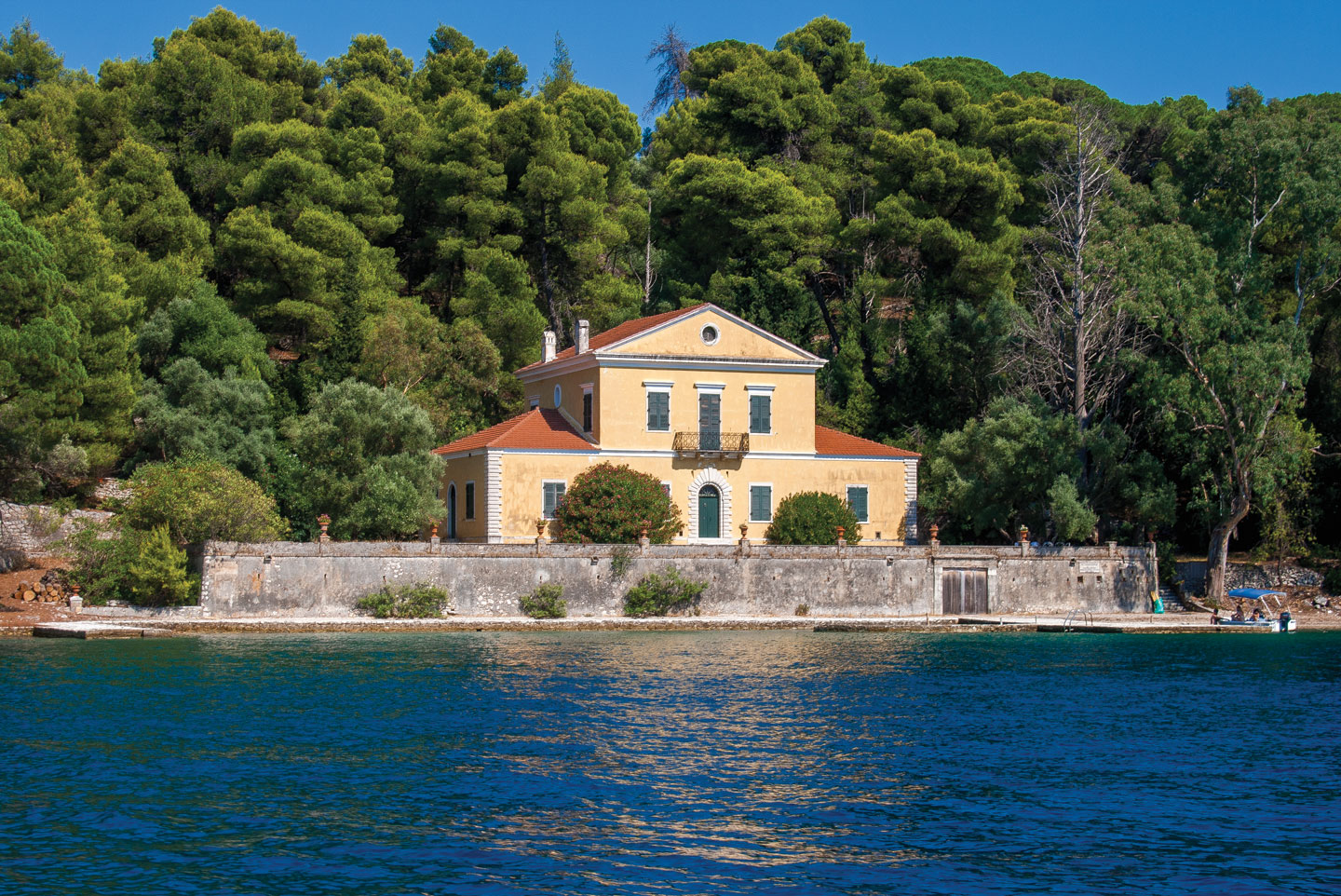 Next to it, approximately one kilometre from the coast is the small island of Madouri that has belonged to the Valaoritis family since the beginning of the 19th century. Two miles from Nydri, beyond Madouri, is the most famous of these islands: Skorpios, owned by Aristotle Onassis. Onassis purchased it in 1963 and since then the island has been featured in all the magazines and newspapers of the world, as the playground of the rich and famous and the jet set from far and wide. North of Skorpios is the island of Scorpidi, belonging to the Livanos ship-owning family.

Continuing south, turn left and follow the signs for Poros.The road, in leafy shade, takes us to one of the outstanding villages of the island, for its semi-circular situation on the brow of a height, not visible from the sea – a relic from the days of fear of pirates. It is called Poros because it is a pass. The land is fertile and there is a great variety of vegetation. This is where in the past the famous 'Lefkada knives' were manufactured. High up above the village at the site of Pyrgi on the outskirts of a vale of olive trees, there are some ruins of an ancient farm house providing information on the use of ‘tower houses’. 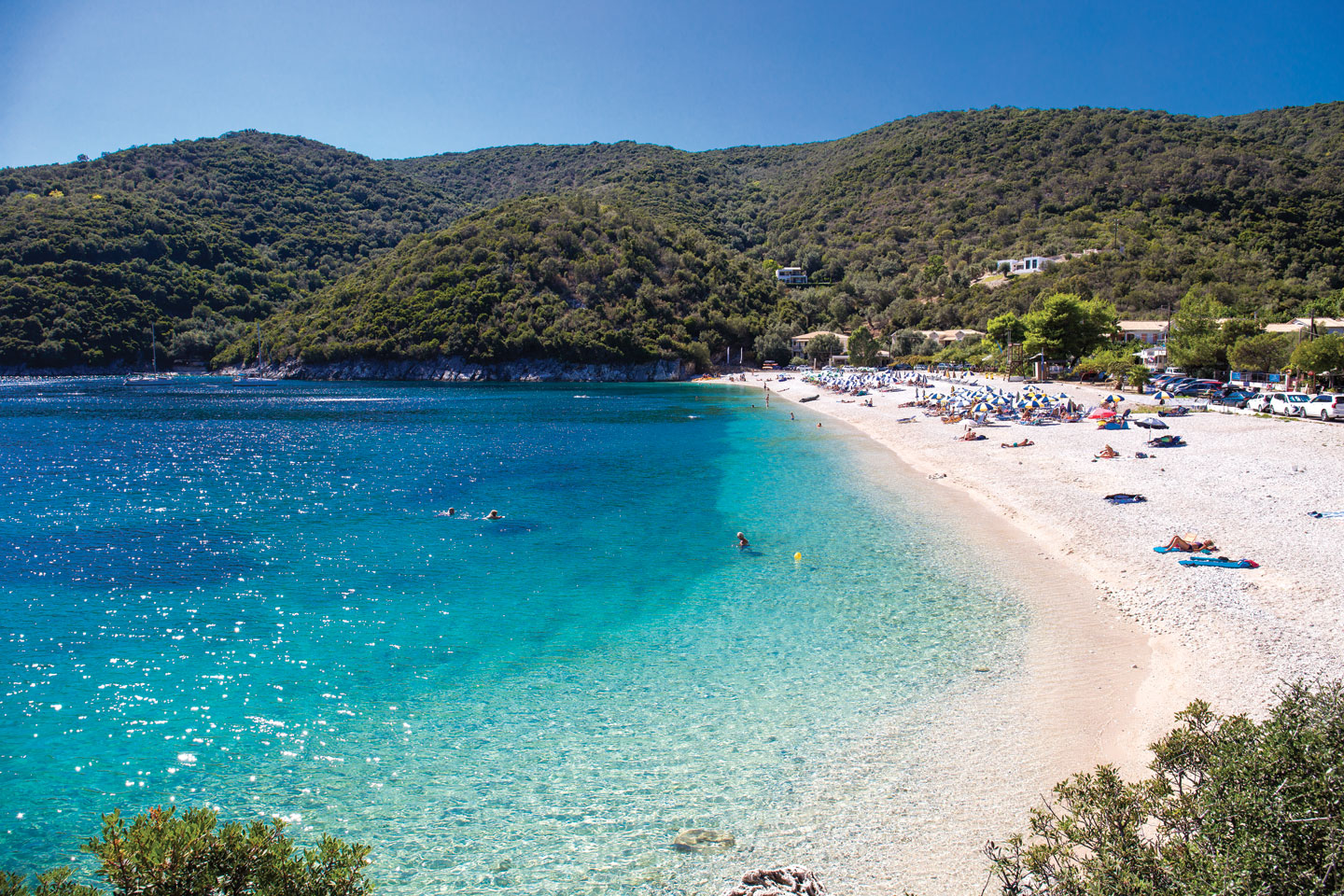 Below the village, on the road to the sea, there are the pretty little beaches of  Mikros Gialos and Rouda with clear waters. It is generally calm there as the narrow-necked cove is protected from the winds, and recommended for a quick swim. 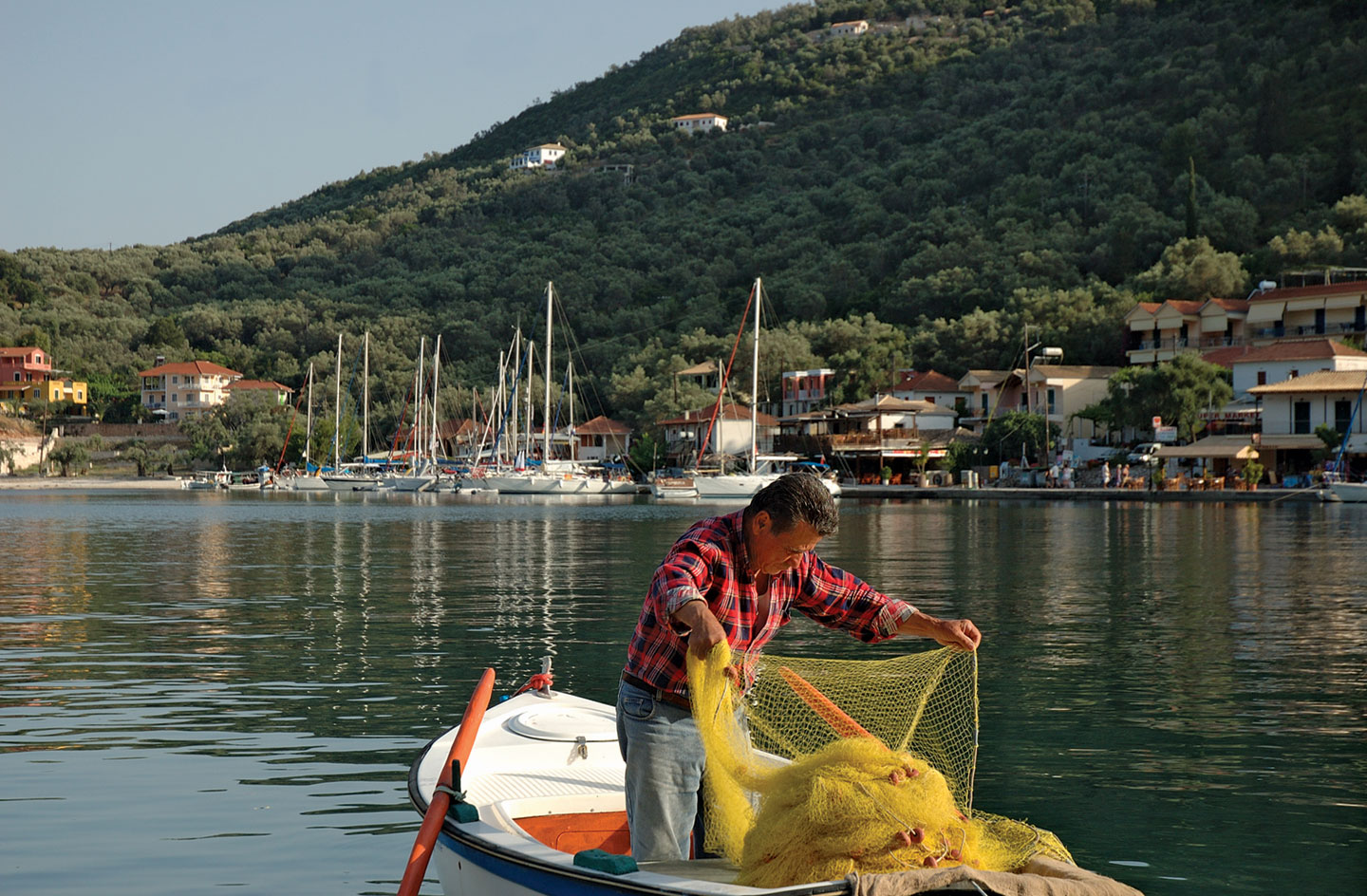 On the main road, some 6 km from Poros, the way goes down to the sea and Syvota. This is enchanting, built right on the shore in the embrace of green hills. It offers mooring and refuelling for many boats and a rest for the crews. According to Dörpfeld’s theory, this is where Odysseus landed on his return home. Today it offers some of the island’s best known fish tavernas serving delicious fresh fish, lobster and seafood. We propose this as the end of the route, to relax, have a meal, a coffee and a rest before taking the road back.

Back at Nydri, there are excursions from here to a completely different environment and atmosphere. First objective: the waterfalls (follow the signs on the central road through the village) for a refreshing dip. The route goes through orchards and fields, through the settlement of Rachi, and, having left the carriage road, heads west along a footpath leading up the mountain, alongside the gorge. 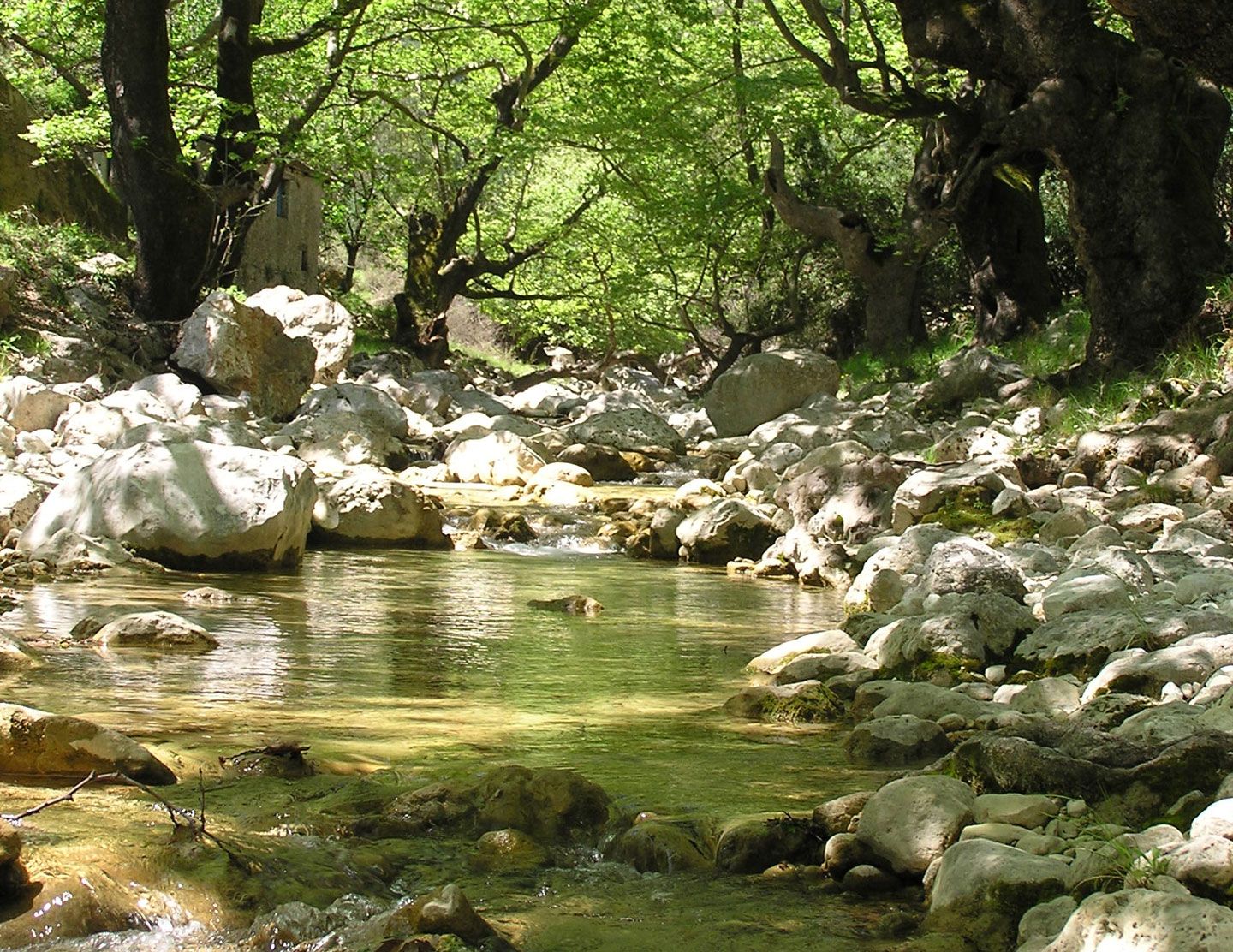 The leafy path ends at a rocky cliff where the waterfall is formed. A little farther on the water collects in a natural pool, where in early summer the water is still plentiful and a plunge in the icy water coming from the mountain heights is tremendously invigorating. In the past there used to be many wate mills here to grind the wheat of the area.