Heartland of the interior

From Lefkada town town as starting point once again, we head towards Sfakiotes. On the way, the surrounding hills are blanketed in rich vegetation: olive trees, cypress, broom, lentisk, sage and even wild vines. As we proceed, the panorama becomes truly amazing: a sweeping vista of Gulf Alexandros, Mt. Xiromerou, the towns of Astakos and Mytikas and Meganissi, Kalamos and Kastos islands. On the right hand side is the site of Boza, where in 1819 there was a clash between the rebelling peasants of Lefkada, indignant at the imposition of extortionate taxation, and the British occupying forces. Following the asphalt road, it is strung with the houses of one scenic village after another , built close to one another on the hills, constituting the municipality of Sfakiotes: Spartochori, Lazarata, Kavalos, Asprogerakata and Pinakochori. 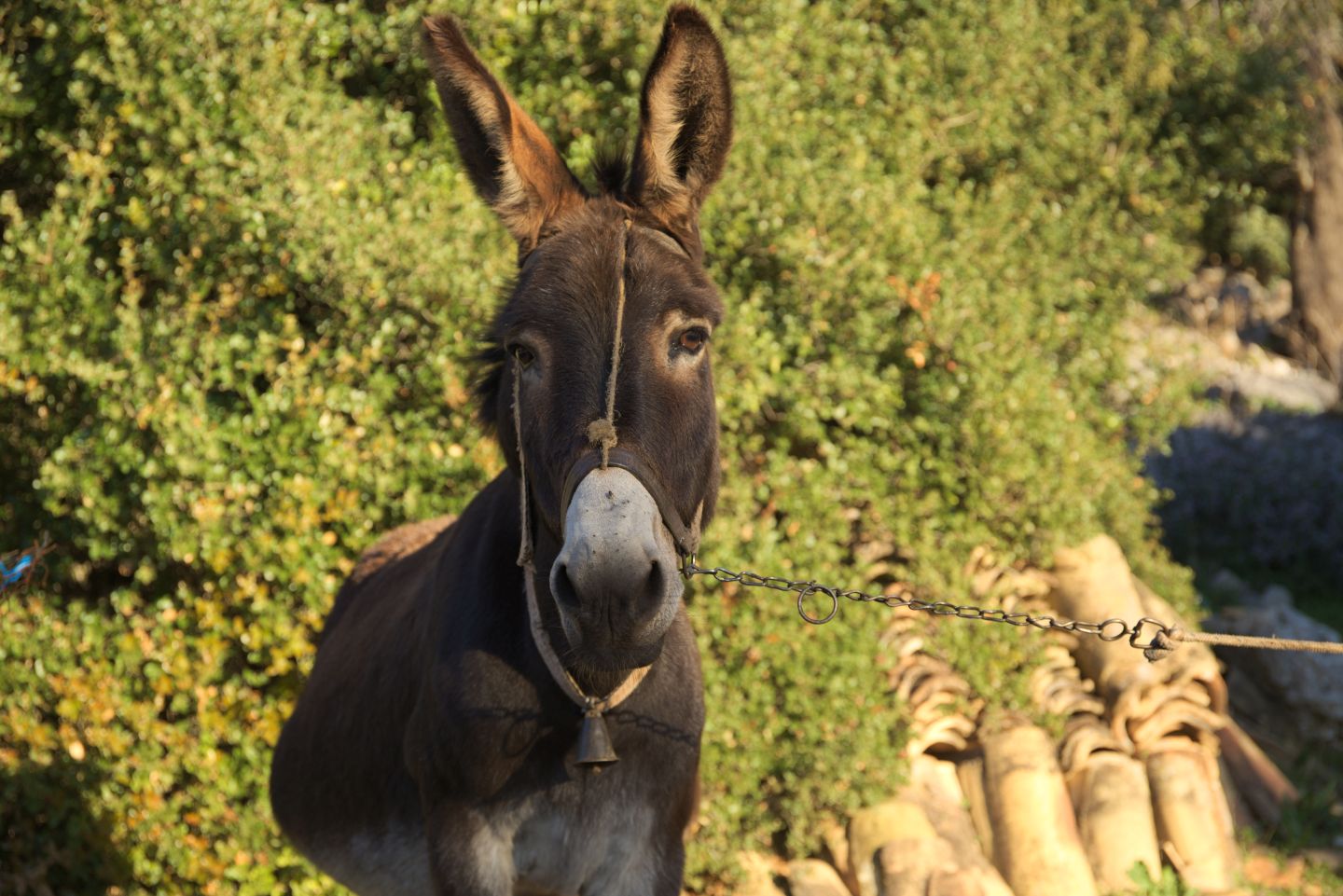 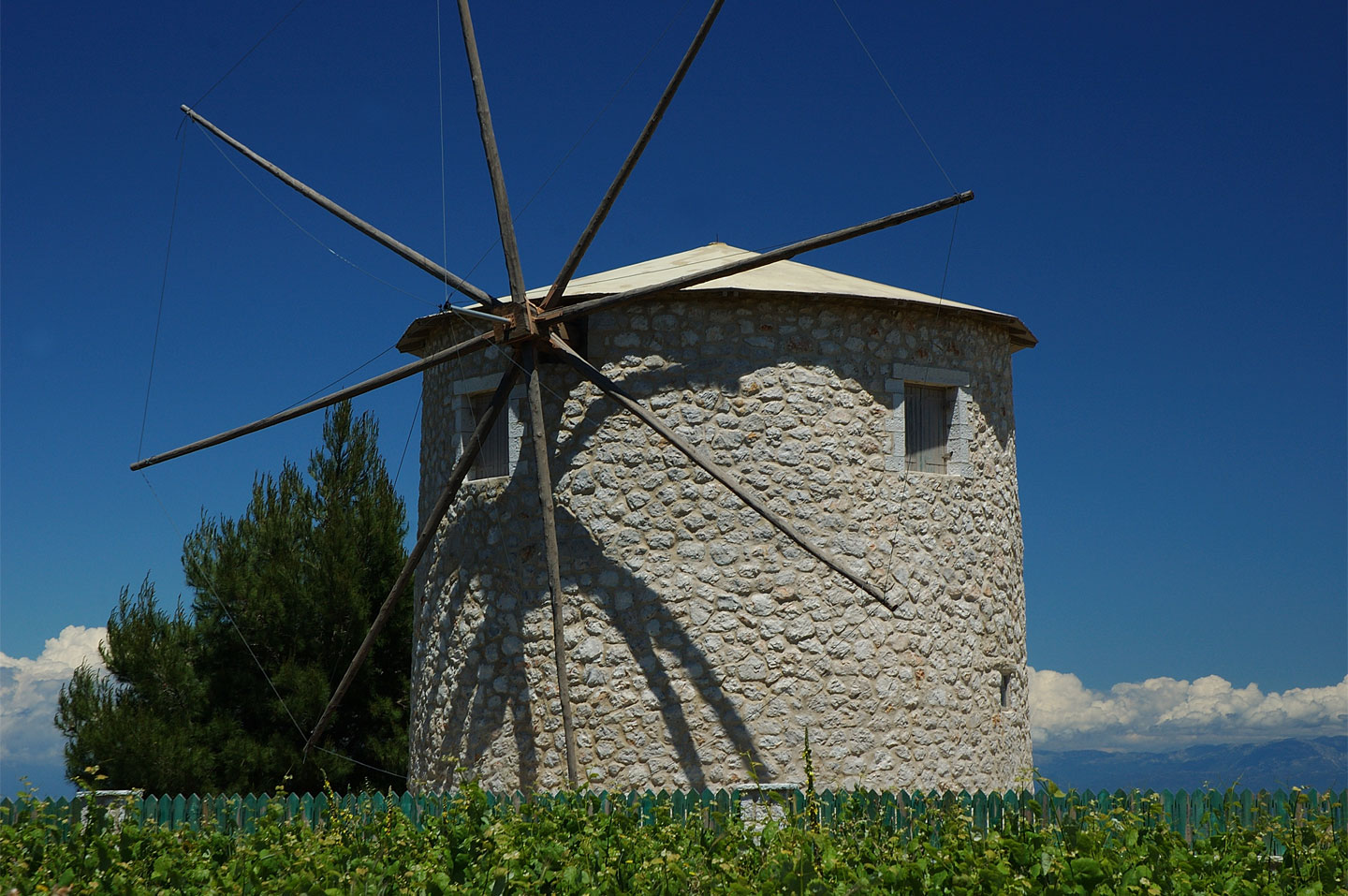 The signpost indicating that you are entering Asprogerakata stands in the square, a spot the locals call  Frya. Like Barakes, the square with its cafés and its grill-houses is another meeting point for the inhabitants of Sfakiotes. The Ascension Day village celebration is held here in this square. Up until the 30s, at the crossroads we come across a little further on, there were traces of the last Anathema (curse) in Lefkada to be laid on a place. Stones stacked one next to the other and one on top of the other by the peasants were a reminder of a murder committed there. At that crossroads, we take the left hand to Karya; the other direction leads to western Lefkada. Pinakochori, the last of the Sfakiotes villages is perched on the hill to the left; the level plain of Karya is spread before us. The road crosses Pigadissani a village of stone-built houses which in the past produced good builders, and will soon bring us to Karya, built in a crescent on the slope. It is the largest and one of the oldest villages on the island. 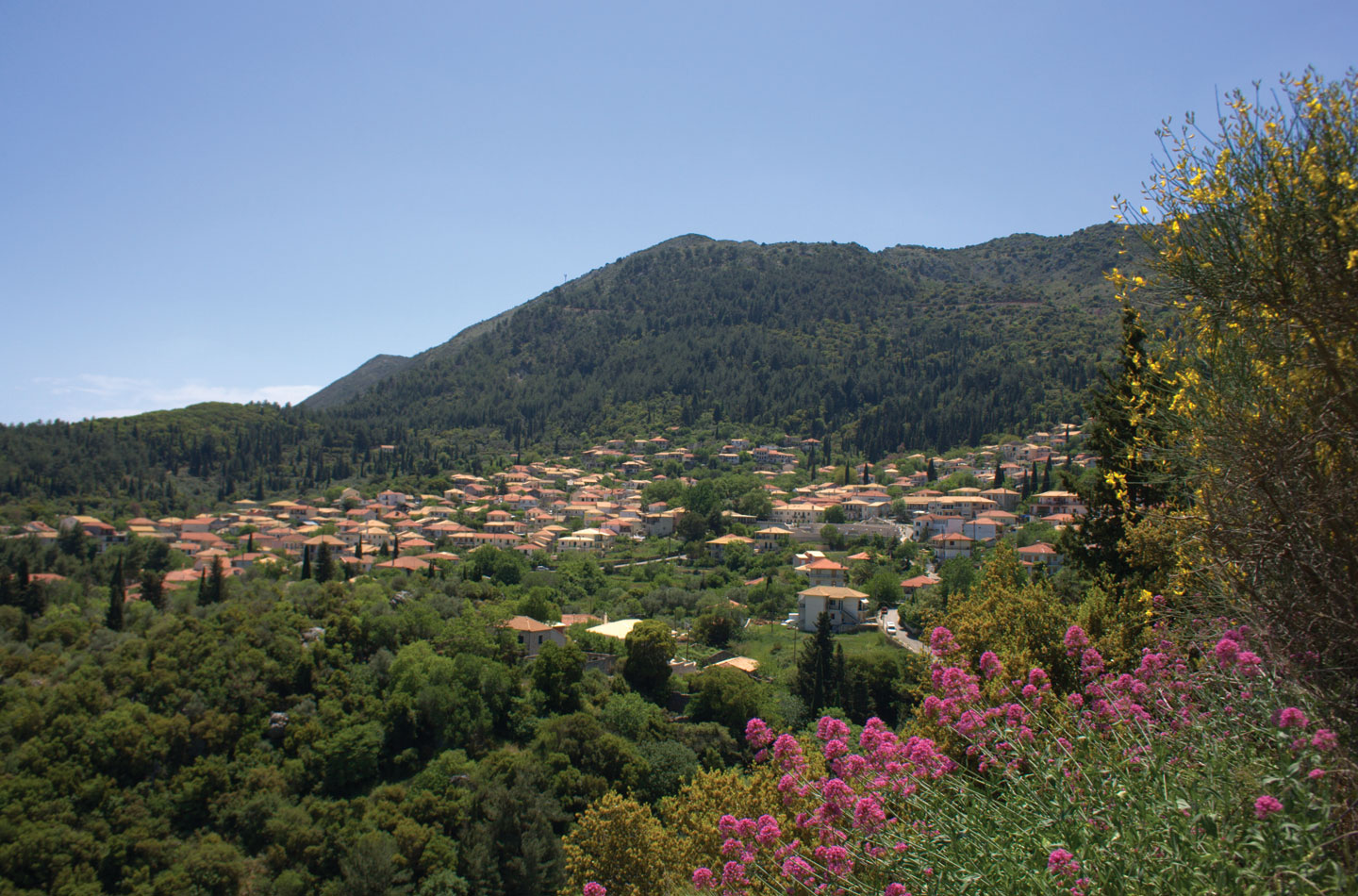 Karya is prosperous, with an excellent climate, well-maintained streets, fine houses, cafés, shops and a splendid central square shaded by huge age-old plane trees. The two gems of churches are the pride of the village: the church of Agios Spyridon, in the central square, with its graceful belfry, built in the late 19th c, has notable iconography, and the church of Agia Paraskevi, situated in the upper part of the village, built at the beginning of the 19th century, with an exceptional Baroque wood-carved iconostasis, the work of the renowned painter Prosalentis. To be in the village on 11 August is a fortunate coincidence as this is the day on which the church of Agios Spyridon celebrates, the village's annual festivity. This is when with every solemnity the tradition of the Lefkaditikos gamos (the Lefkada wedding) is revived with great pride and attention to fidelity, an event taking place here for decades, reproducing the ceremony of marriage of the past.The village is known throughout Greece for its woven fabrics with their pleasing motifs, and especially for its ‘Karsaniko embroidery’.

The monastery of Agios Ioannis tou Prodromou stands on a slope of the plateau, surrounded by greenery and in a particularly beautiful landscape, also known as Ai Giannis sto Livadi. It was founded in 1605 and flourished in the early 19th century, when it was the wealthiest of the island with the most monks. It is closed nowadays, but its situation is in such a beautiful and peaceful environment, into which it blends so successfully that it truly rewards those visiting it.

To continue our route, we return to the entrance of the village and follow the signposts to the right leading to the airbase. We pass the Museum of Maria Stavraka or Koutsocheros, famous for her embroidery, an artist of the Karsaniko technique. The road up to the airbase is not in good condition, without however being hazardous for us or the car. The panorama unfolds on the right of Lygia Bay, Akarnania, Lefkada town and Preveza, with the Epirus mountains in the background. 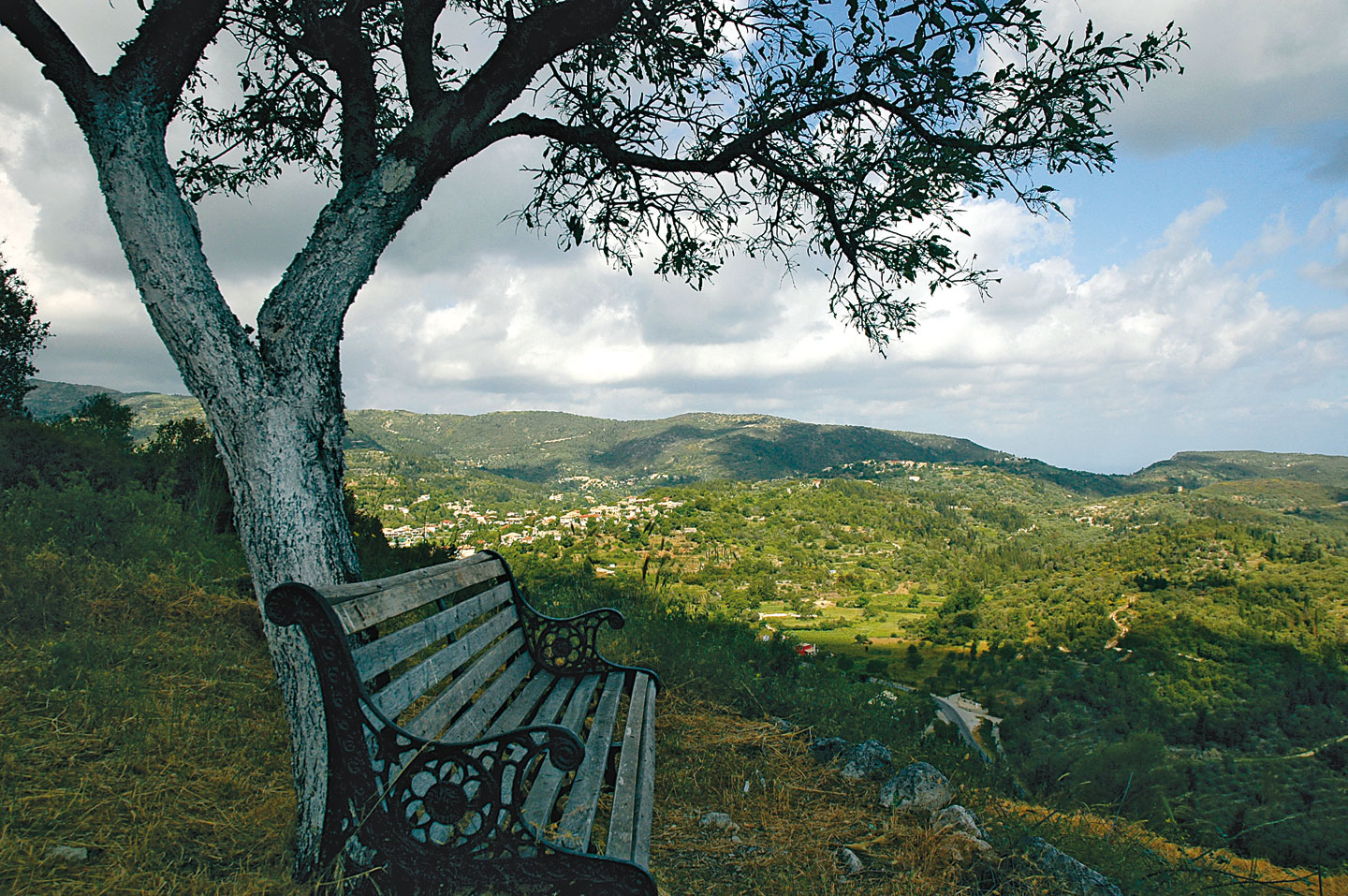 Not far from the crossroads, radar installations can be seen on the slope to the right: this is now a military zone. The camp is in a plateau overlooked by radars and - the now disused - dishes behind. If we are in luck we might glimpse the odd hare or fox scampering along. A small sign to the right points up a dirt road to the white-washed chapel of Ai Lias. The scenery from there is well worth enjoying. Continuing to the right, after a short distance we come to the beguiling chapel of Agios Donatos on Englouvi’s plateau, with wells in front of it and stone-built huts around it called voltos, built with exceptional craftsmanship and where until a few years ago farmers and shepherds could shelter. The remains of a substantial pre-Roman tower stand on the plateau, from which, according to tradition, Bishop Donatos was flung to his death in one of the persecutions of Christians. There are vineyards around, but even more abundant are the famous Englouvi lentil fields whose produce has been awarded prizes in many agricultural exhibitions. 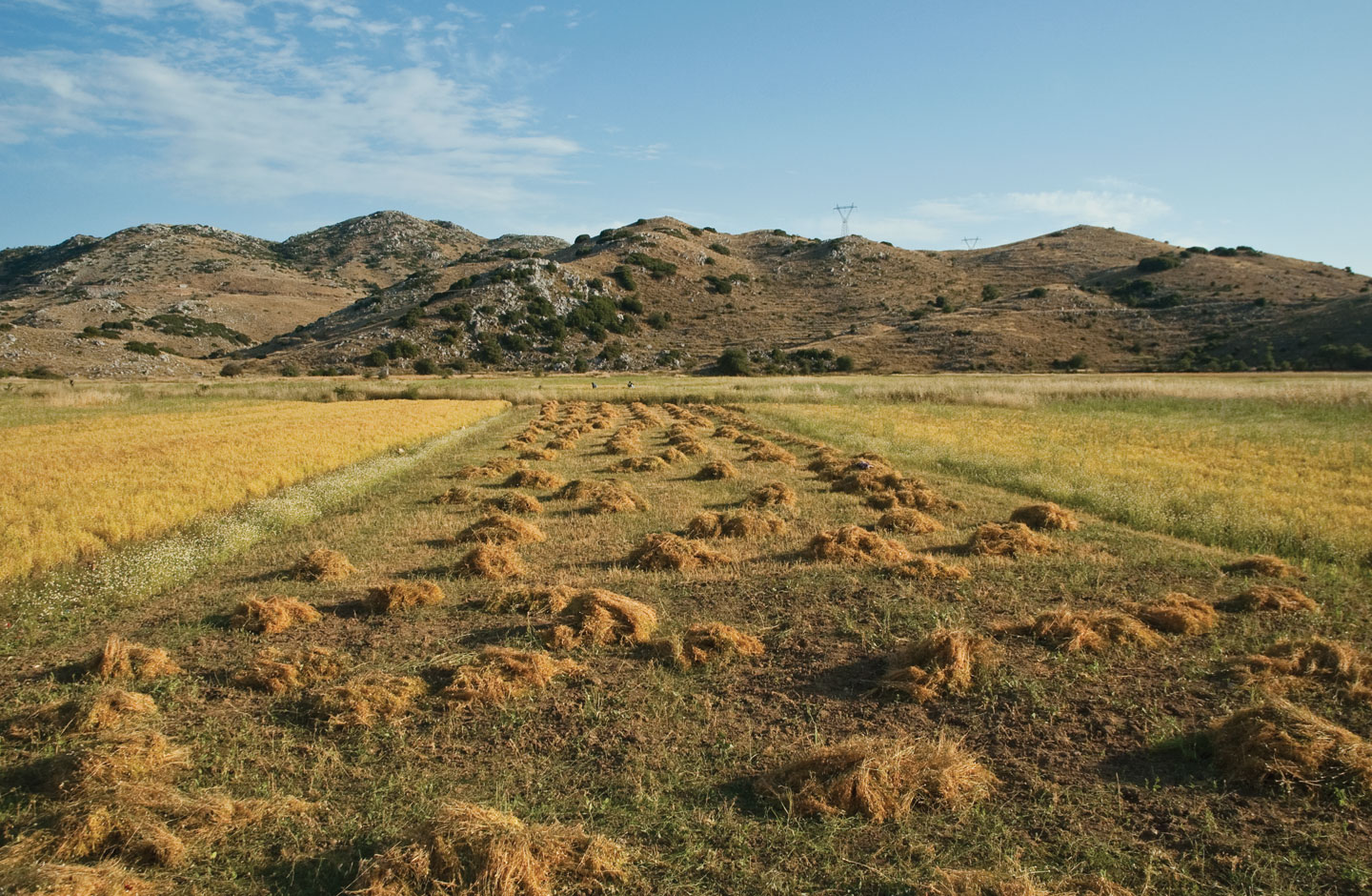 To continue towards the Asomatou monastery (see alternative route below), turn left and follow the road sign to Englouvi. The road snakes uphill, with glimpses of the village from above; it is particularly appealing with its red-roofed farmhouses framed by greenery. It is one of the oldest of the island’s villages at high altitude. The hills around are carefully terraced, with supporting stone walling built by the inhabitants in an effort to utilise every inch of soil. Once in the village, turn left, past the church of Ai Giorgis, leaving Englouvi behind, and head towards the monastery of Asomatou. The road winds through the abundant wild plant-cover. Some few kilometres further on look out for an ancient ivy-cloaked stone wall to the right: this fences in the monastery’s handsome building. You should not miss seeing this, one of the island’s best, dedicated to Asomatos (the archangel) Michael. 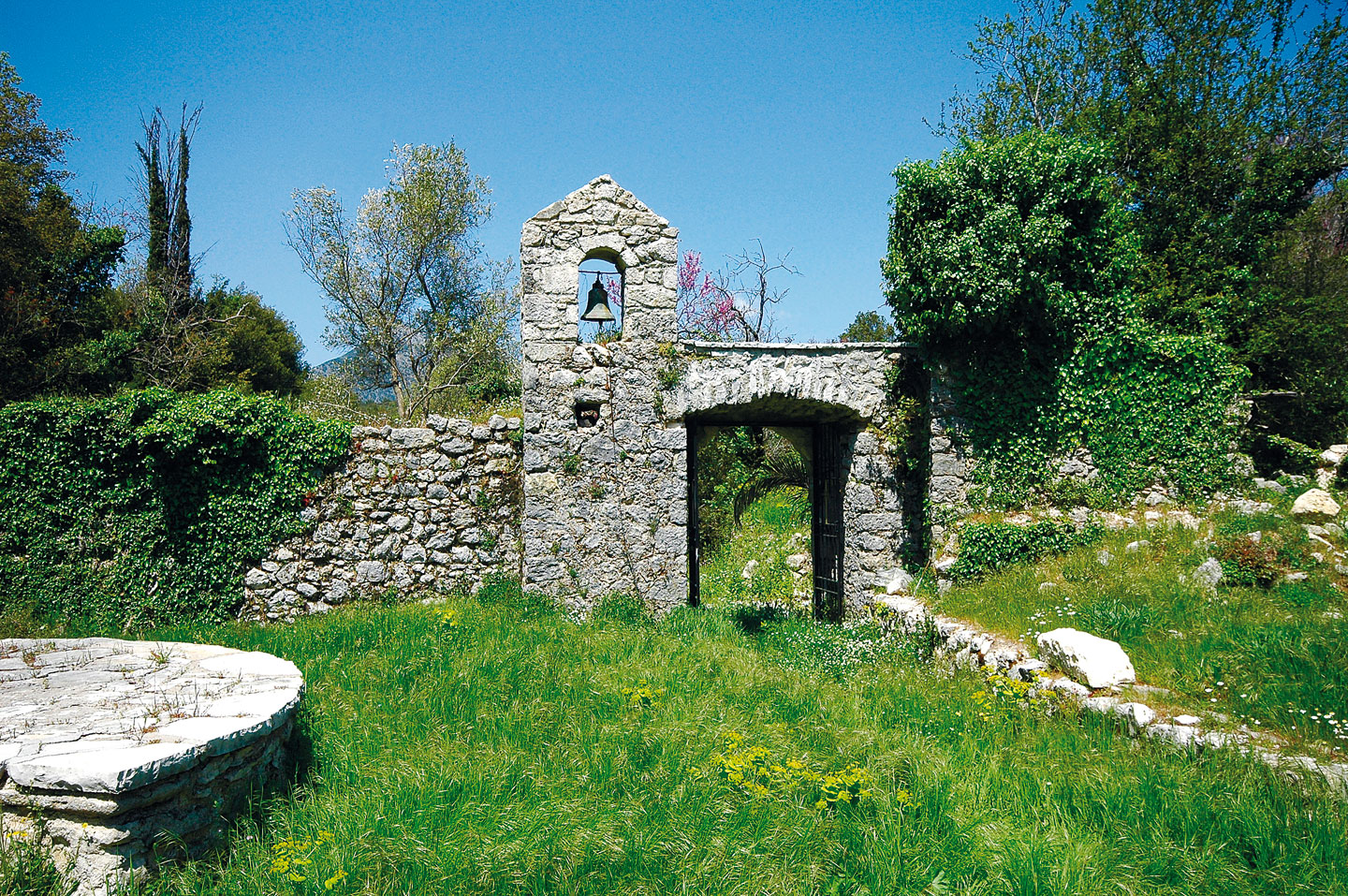 The dirt road descending to the village ofVafkeri reveals its leafiness and flowing waters, here a variety of trees and bushes flourish: plane, almond and olive trees, fruit orchards, oaks and holm-oaks surround the dwellings of the few permanent inhabitants and the peace and quiet is so enjoyable amid the beauty of the landscape, and in summer especially, the coolness. If you find yourself in Vafkeri as evening falls and some well grilled meat would be welcome, then a stop at the village taverna is indicated. 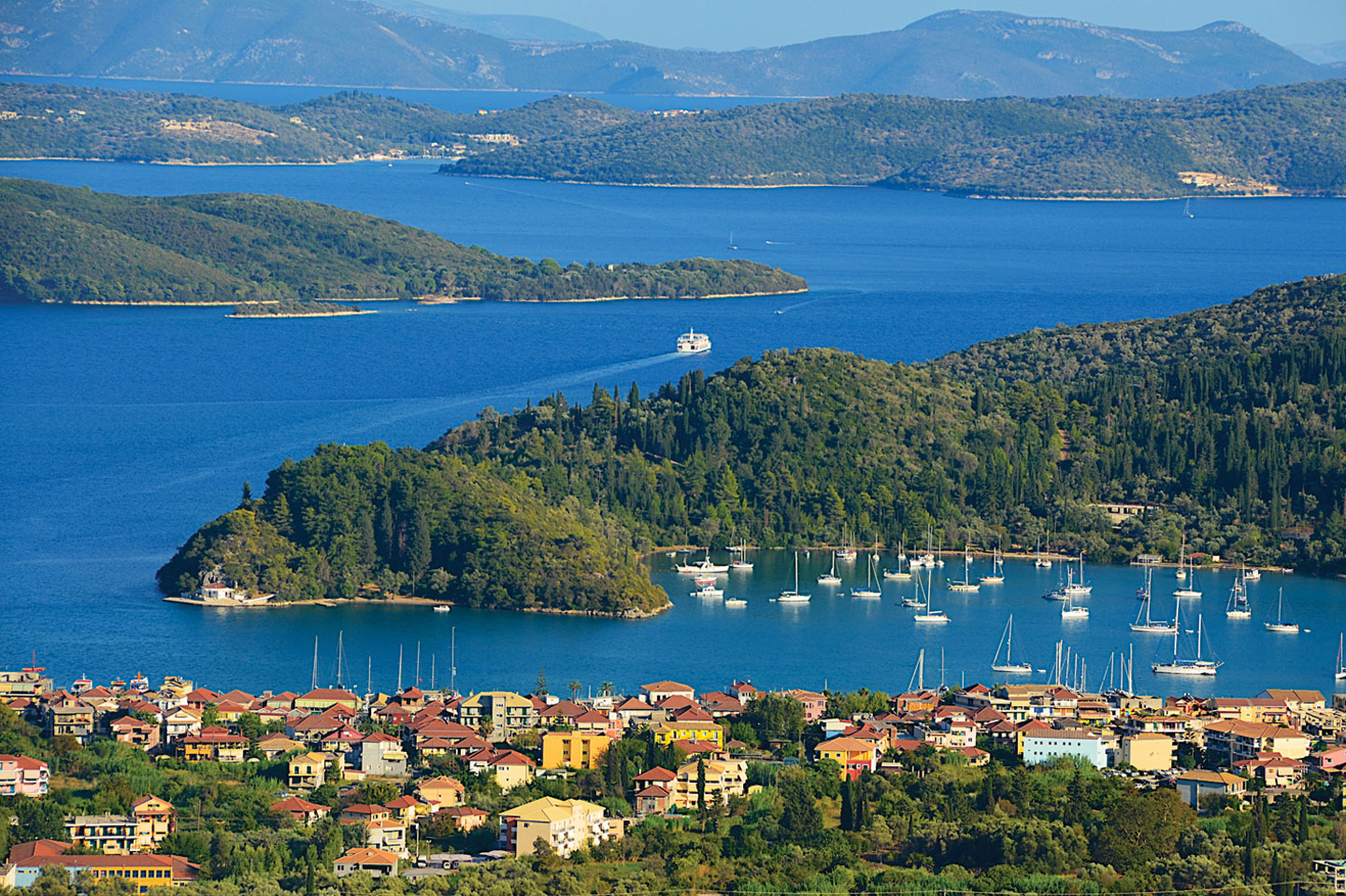 From Vafkeri the road goes down to Nydri, winding along with a view over Vlycho Bay. It makes an idyllic route, particularly at sunrise with spectacular displays of colours, also on moonlit nights when the bay is a glitter. 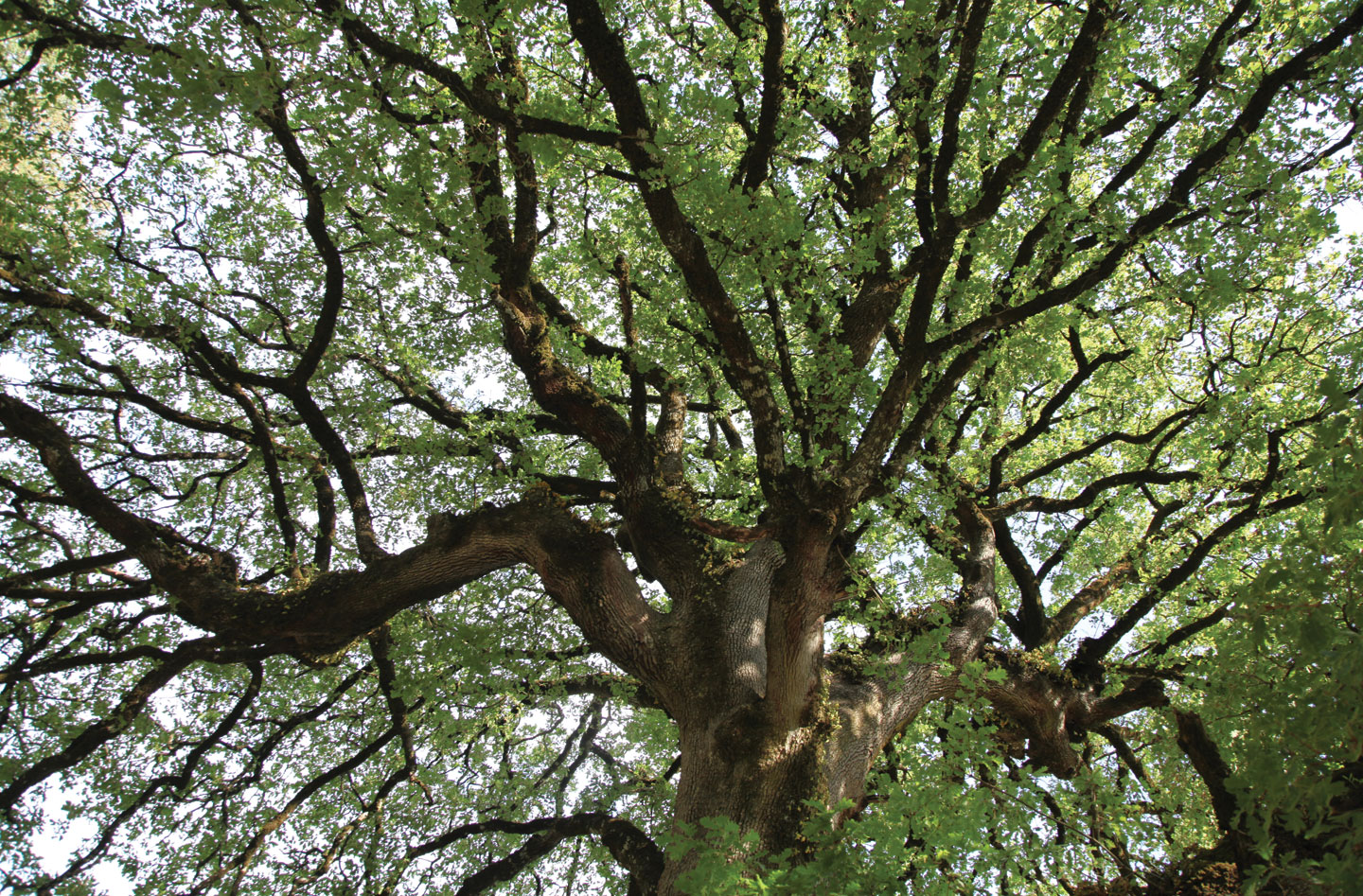 It is one of the loveliest parts of Lefkada’s interior with rare flora, a forest of a rare type of oak with an impressive geological formation. At some point on the way, you will come across a wooden gate, but do not think you have made a mistake, simply open it and continue. The area with its wild imposing beauty offers itself for walking tours. The peak at the end of the route will reward you with a magnificent sight of the islets of Lefkada.

The routes proposed around the municipality of Sfakiotes endeavour to show the remoter parts of the interior. These villages lie in a truly striking landscape and the soil is exceptionally fertile. For those who enjoy a hike, there is a plethora of footpaths to be discovered, leading to places with terrific vistas amid scenery of wild beauty. Some of them will be described here. Shortly before reaching Lazarata village, there is a sign on the left indicating the church of Profitis Ilias, on a hill. There is an unobstructed view of the villages of Sfakiotes from this spot, all the way to Lefkada. 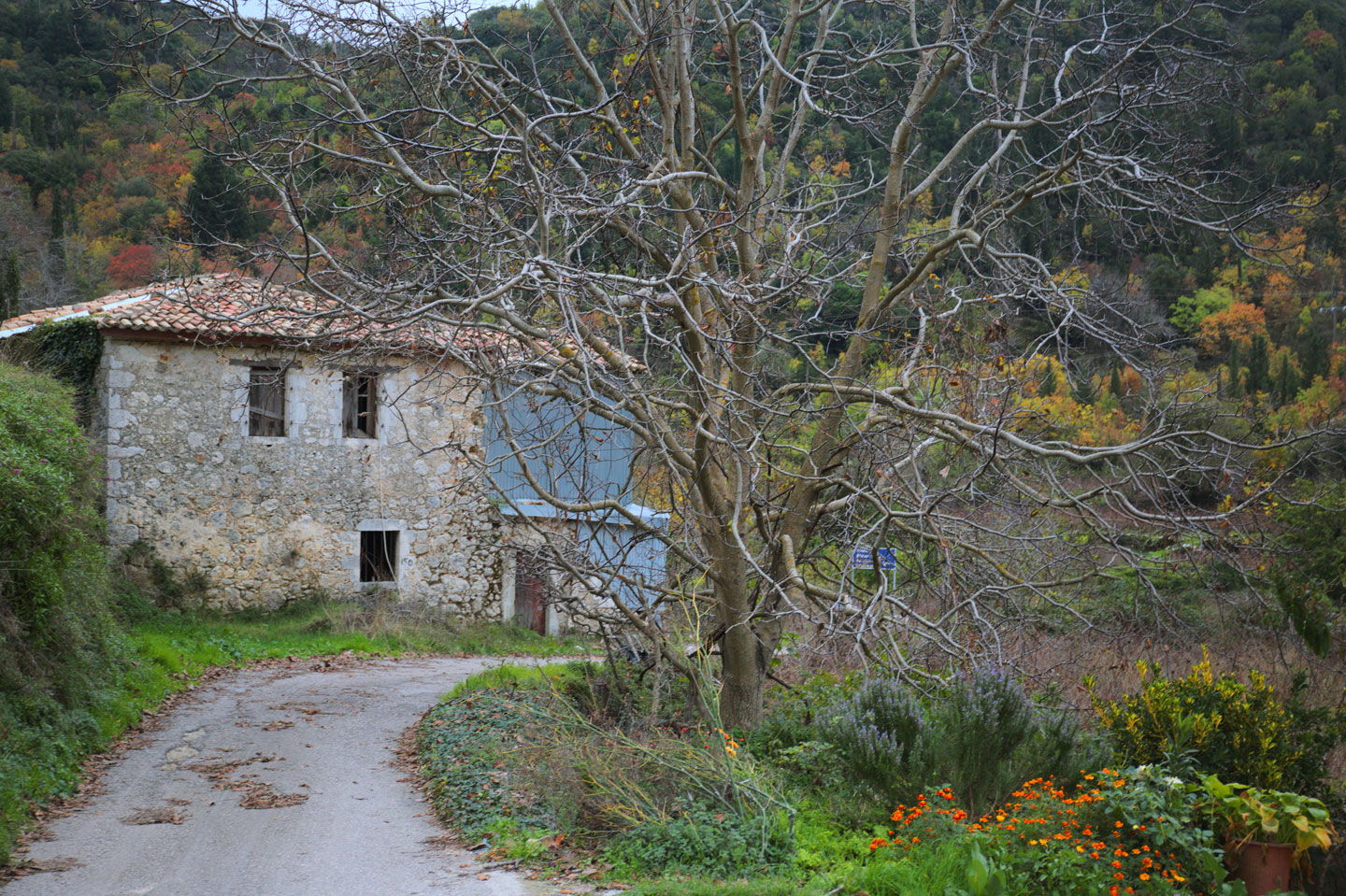 There is a footpath below the belfry, leading to Spanochori and Lazarata for those who would like to take it. Or, from the part of the hill behind the church, a few metres on there is a path to the left. It may be something of a challenge for the unfit or smokers, but it is well worth it as it reveals the view of another side of the island with a jewel of a shrine, Agios Stefanos, built into a niche of the rock. 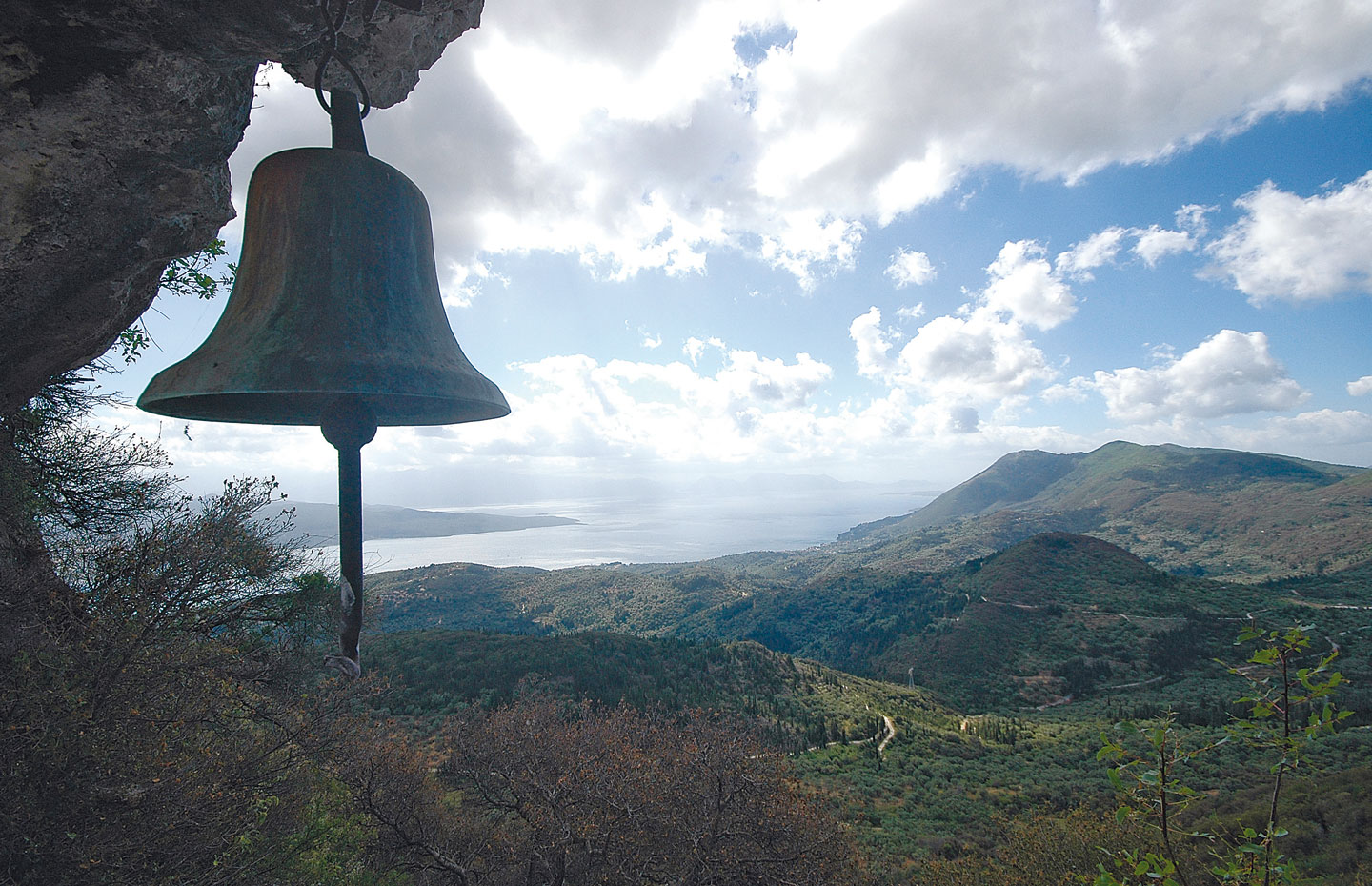 Returning to the main road continuing straight ahead towards Kavalos, there is a sign pointing to the right and a short distance further on, the road to the left goes to the centre of the village, but we continue straight on to the outskirts. Shortly after the village the way goes uphill for a bit and soon levels out to a plateau upon which the church of Pantokrator stands. It is a privately owned church, with door lintels from an ancient Greek temple and an oak tree serving as the belfry. 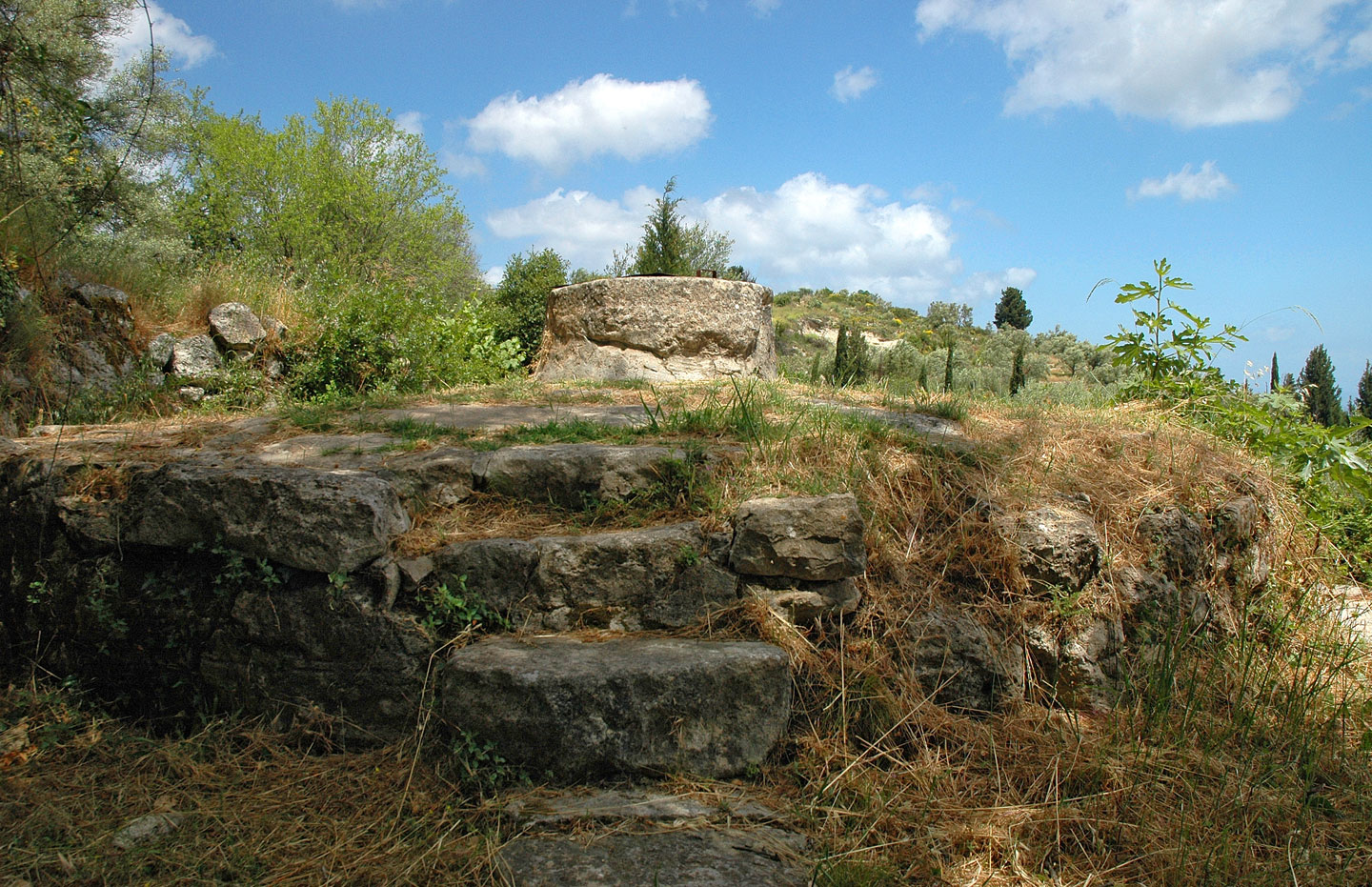 Returning to the road, a short distance on it is worth a stop to have a look at the Stenofrya wells which once supplied the hamlet with water. The grooves rubbed into the stonework by the rope at the mouth of the wells make an intriguing sculpture. Back on track, we head for the ravine of Melissa - the most impressive feature of the area. If you are driving, check the mileage counter and when you have covered approximately 1300 meters look out for a stone wall to your right. A few metres further down to the left a dirt road leads off to the ravine. 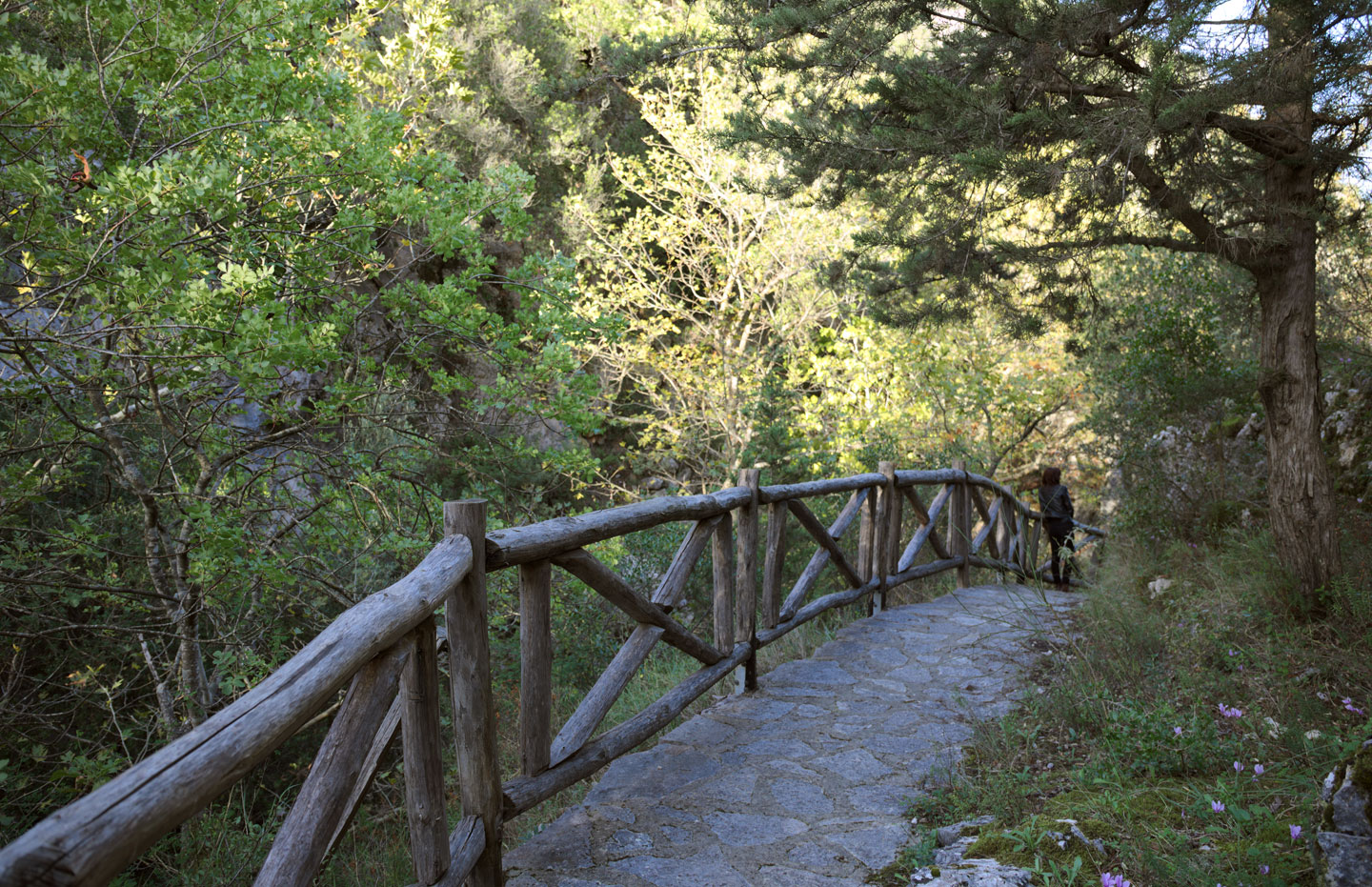 The dirt road leading to the ravine is passable but some care is needed. This route breathes an air of isolation and virgin countryside and the existence of wildlife all around is evident from the bird-song and croaking of frogs.

The spring in the cave is the first stop. Below there are bridges, arched or level, old mills and other constructions once in operation, showing that in the past this place buzzed with life, a centre of activity for its denizens. References to these buildings exist in the decree of Volteros Vryenios, issued in 1355. Continuing on, we soon come to a clearing, the confluence of three torrents (now almost dry) whence the ravine’s paths set out. The Municipality has done excellent work in rediscovering and restoring the ancient footpaths used by the locals. They have been paved and bordered with very nice protective wooden railings all along.There are signs for two directions: to Apetasti and to Kako Langadi. They are two km long and take about half an hour to walk, to the accompaniment of bird song  and the croaking of frogs. 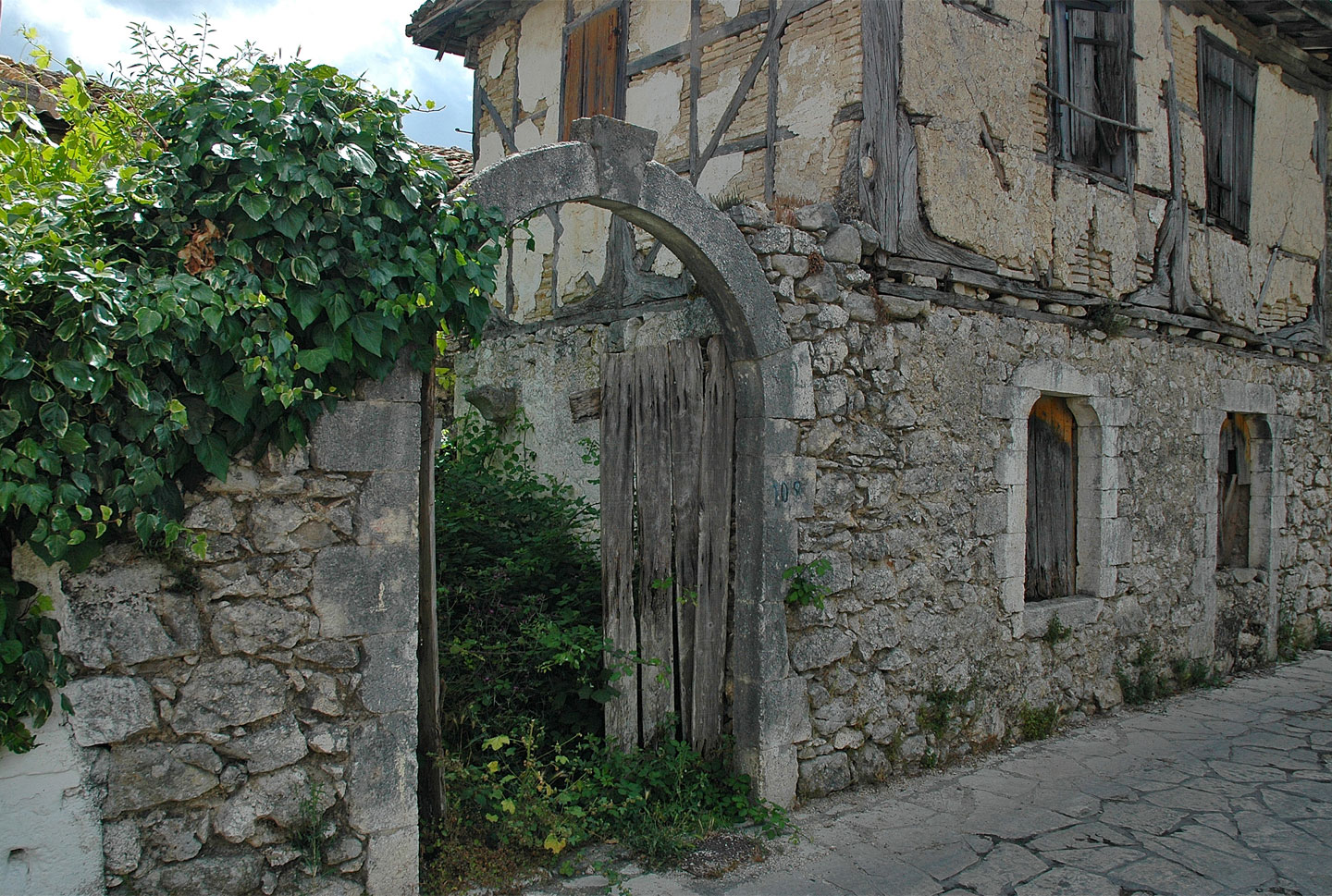 Returning to the asphalt road, make a right towards Kavalos, the suggested stopping place for a rest in the small village square with its two traditional-style cafés. Here it seems that time stopped in another and better era. If you appreciate it, the impression will be a pleasant experience. The locals are always interested in genuine communication.

Kavalos is situated in the most advantageous position compared to the other villages in the municipality of Sfakiotes, because it lies on top of a hill and looks out far and wide. A walk around the lanes of this village keeping its traditions is interesting. It is also worth visiting the village’s windmill, recently restored, the churches of Agia Aikaterni and Agios Nikolaos with excellent frescoes by Spyros Gazis and an iconostasis by Prosalentis. Also do not miss the very well laid out folkloric museum, housed in a fine building in an idyllic environment. 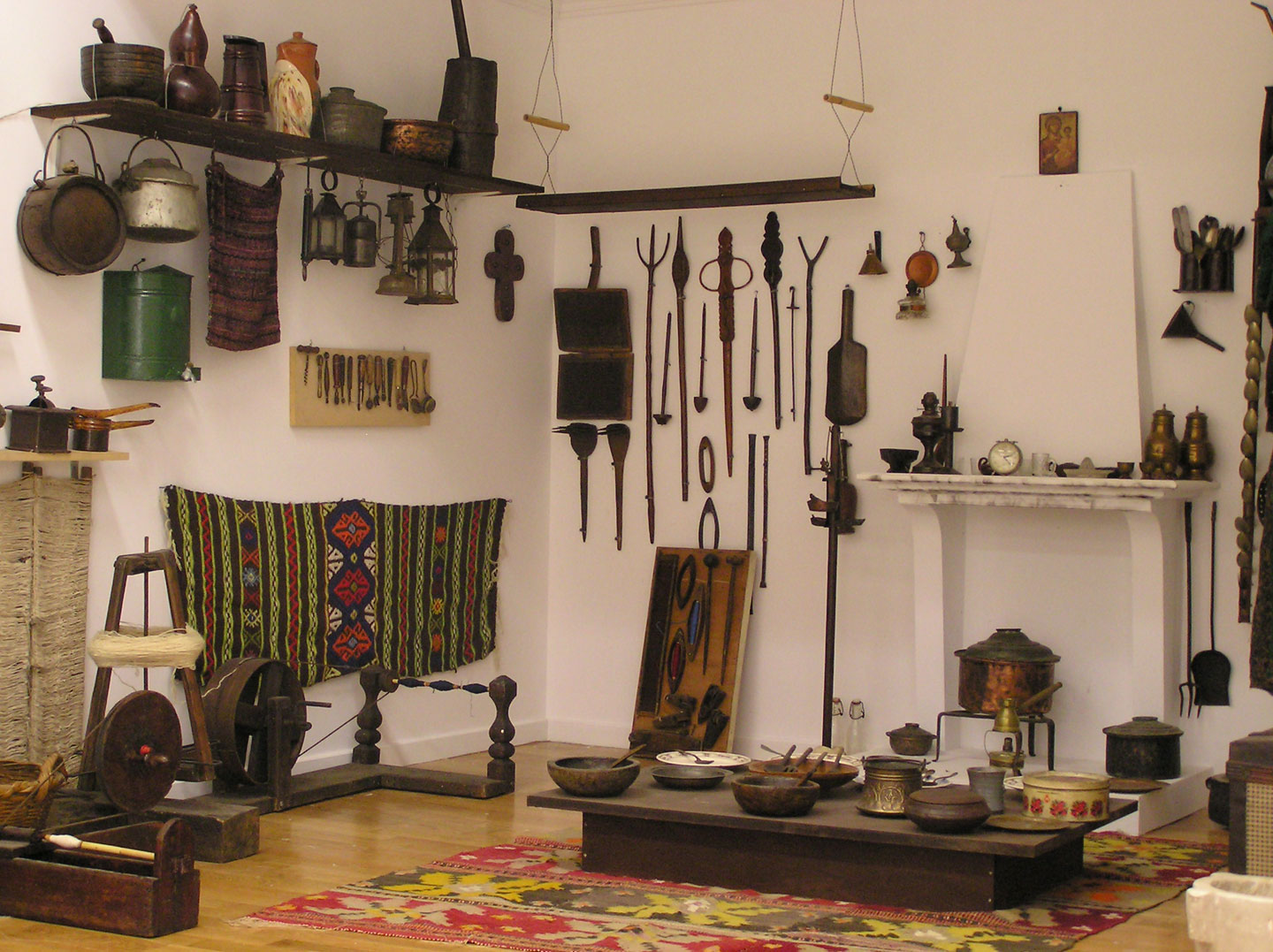