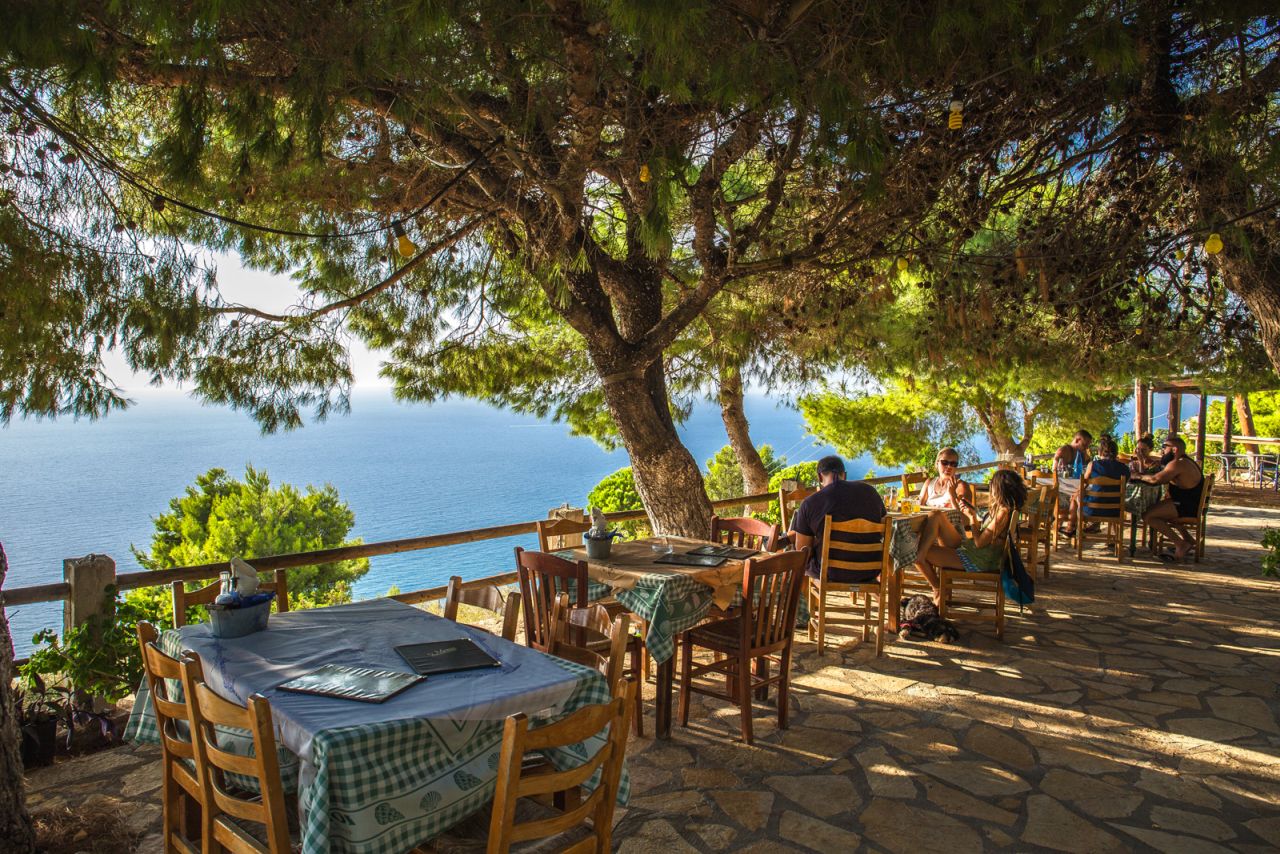 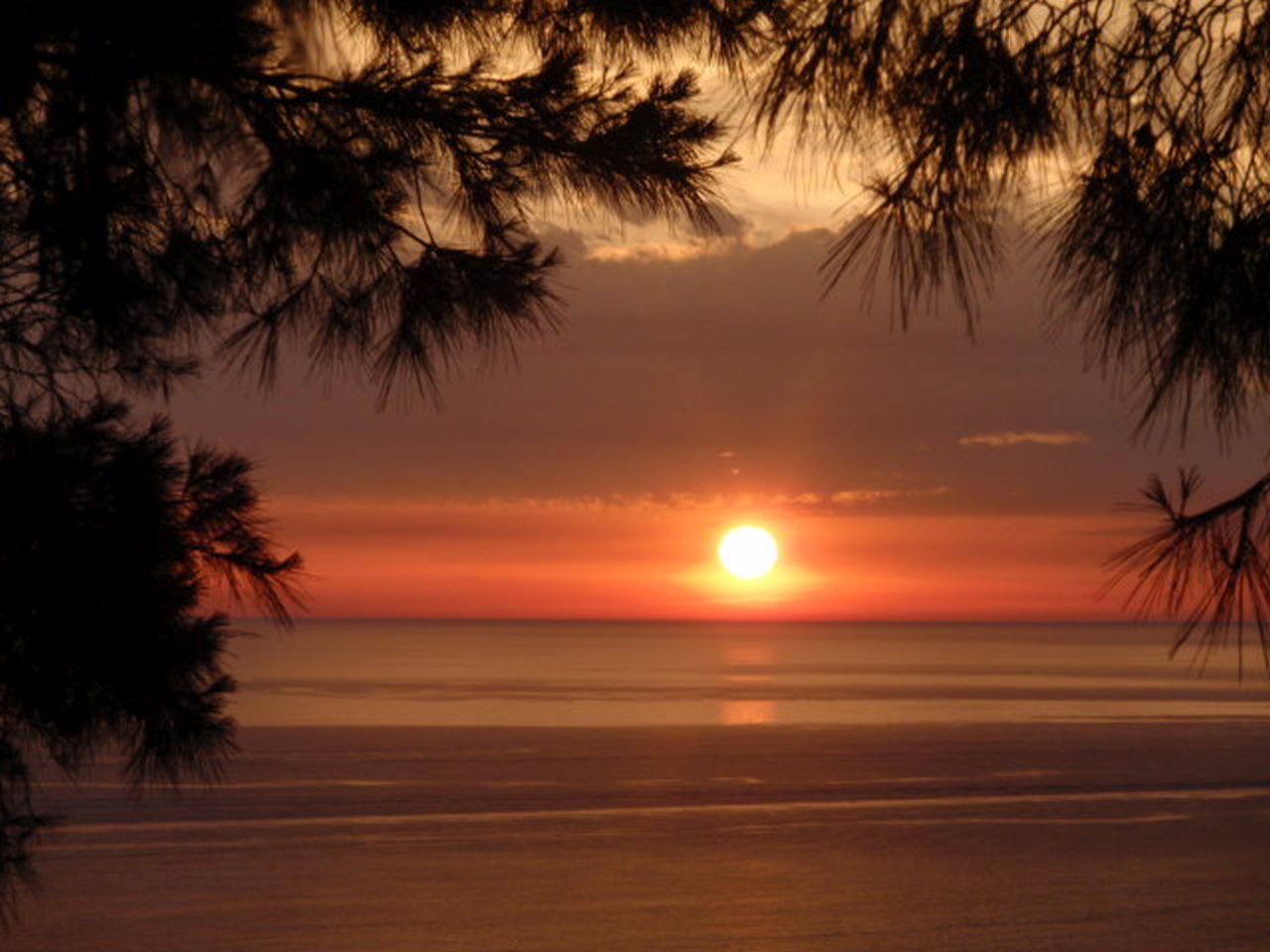 The traditional, family tavern par excellence. Ionio tavern in Lefkada epitomizes authentic home cuisine and its menu appeases, for many years now, gourmands coming from all over the world.

Here, you will enjoy this unique view and the delicacies offered.

Mrs Dina and her family will pamper you and offer you Lefkadian dishes, prepared with care and skill with local ingredients.

Grilled pelagic fish, rustic rooster with pasta, rabbit stew, goat with oil and oregano, Vergado (braised wild goat), Lefkadean pies; these are only a few of the dishes you will find here, at the Ionio taverna!

Today more and more of us worry about the origin and especially the quality of food we eat. We offer you a feast of flavors with the best ingredients and primarily prepared with care.

All our products are prepared by us with fresh ingredients. We invite you to taste our traditional dishes. We can accompany our meals with wine and good company.

We organise wedding and baptism receptions, engagement parties and any other social event you wish. Our quality is one that will reward you as we achieve great flavors at very low prices. Do not hesitate to contact us for a free quote.

Here, where the sky only meets the sea, and gives you the feeling that the horizon is endless, as the sun sinks into the blue waters of the Ionian Sea…Here you will find us.

Attractions close to us

It has been distinguished as one of the four best beaches in the entire Mediterranean. A beach with golden sands, turquoise sea, cliffs and deep waters. Beaches which will amaze you!

One of the most beautiful and unique beaches in Western Lefkada. A sandy beach with clear waters; a beach with vegetation that reaches the coast; a beach where imposing rocks intersect violently. This beach will remain forever unforgettable!

The Holy Monastery of St. Nicholas is located at the periphery of the village Athani, on the peninsula the Sacred Nira (as the locals pronounce it). The name of the region has probably derived from the pagan temple of Apollo on the steep cape of Lefkada. The monastery was built around the 17th century by the Robotis families, Katzigianni, Chriti, Koutsantoni, Bogordou, Zacharatos and Kamidavli, who donated several estates to the monastery.

The monastery functioned under the patronage of private law, ie. the administrators of the monastery were the families of the founders, who every two years elected two or more administrators, and the abbot and vicar of the Monastery. Many times the Monastery of St. Nicholas, because of inaccessible location, was used as a place of exile clergy.

In the late 19th century significant restoration works were conducted under the supervision of active abbot of the monastery, monk Pangratio Katopodi. Today it is considered an active monastery in the church administration committee. The monastery celebrates every year on May 10th, to commemorate the passing of the Holy relics of St. Nicholas through Lefkada, when taken from Myra, Lycia to Bari, Italy.

Now the Holy Monastery of St. Nicholas has reopened and work is being undertaken for its permanent residence. The three monks who are there will welcome you and guide you to the monastery.

At the cape of Dukato you will find one of the most famous cliffs of antiquity, probably the Homeric “white stone”, with white rocks at a height of 60 meters above the waves of the Ionian Sea. In ancient times (1200 BC), they made sacrifices to appease the gods and the Spirit of Tempest. Later (400 BC), they replaced the victims with offenders who were given salvation opportunities. Before they threw them off the rock, they tied birds and feathers around their bodies for a smoother landing. If the offender survived, he was given his freedom.

In the 6th century BC the tradition for the leap of love was widespread, as the lyrics of many ancient poets reveal. This was what was commemorated by Sappho, the great poet of antiquity, and that was where she allegedly leapt to her death. The myth reaches our days and is therefore called Kavos of Kera. Today there remains no trace of the temple of Apollo, because that is where the lighthouse stands.

The lighthouse was built in 1890. The tower height is 14 meters and the focal height of 70 meters.