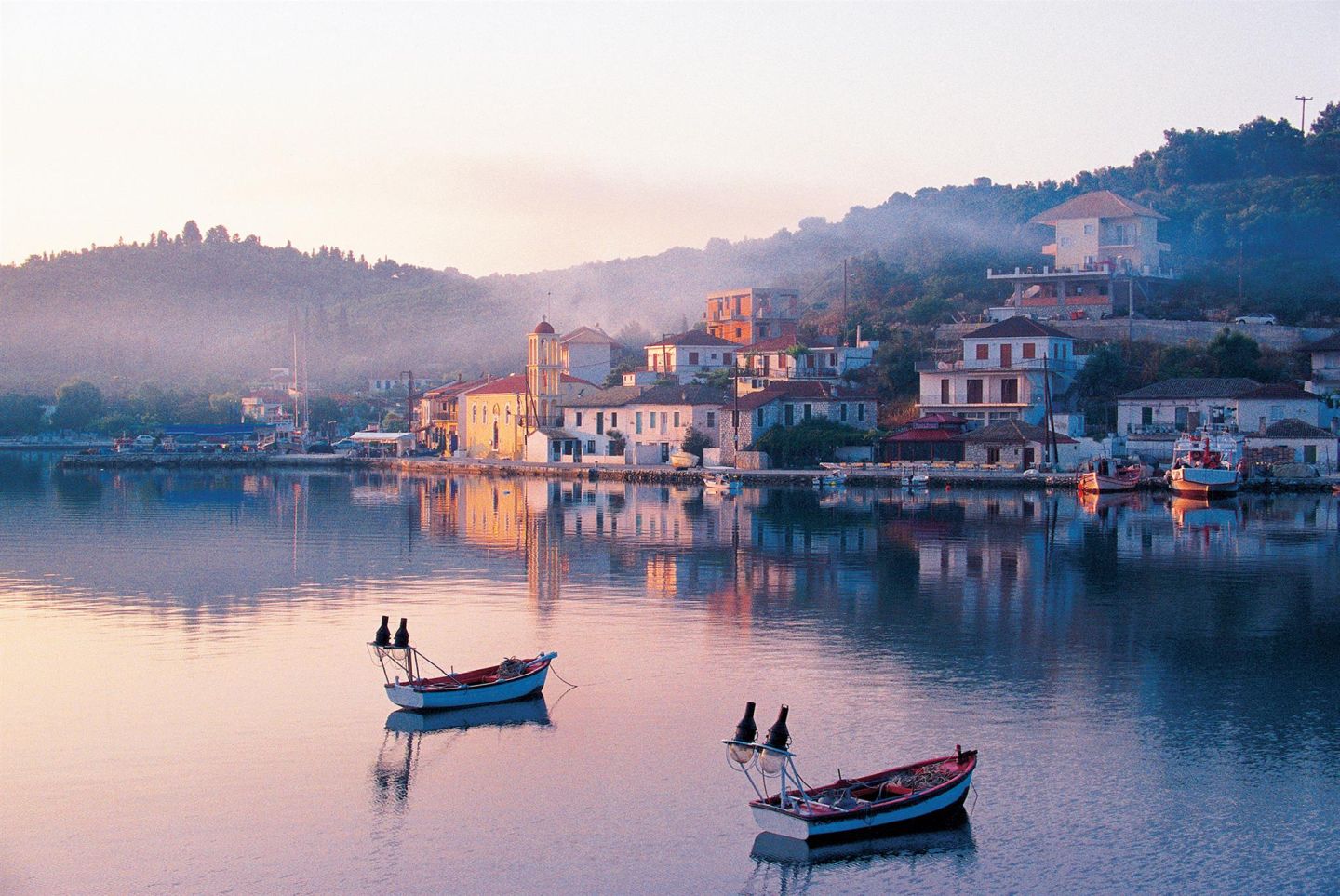 With Nydri as a base and the frequent regular boat departures, it is well worthwhile visiting one of Lefkada’s larger islands, Meganissi, whilst Kalamos and Kastos are accessible by boat from the village of Mytikas on the coast of Aitoloakarnania. All three islands have splendid beaches, small harbours for mooring and hamlets in the style of the 60s. They are fishing grounds and the tavernas serve fresh fish and local delicacies. 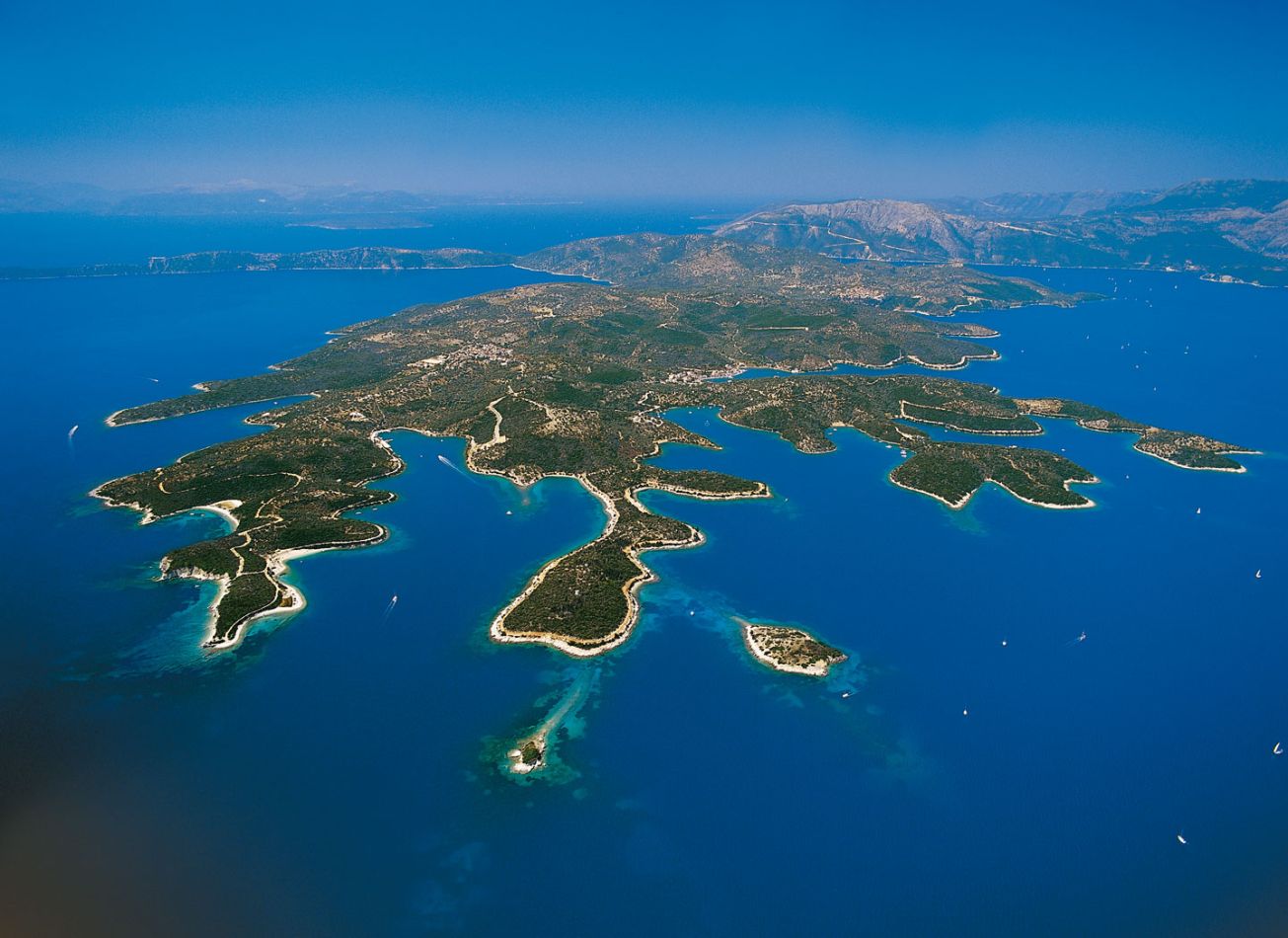 Seen from above, there is an enticing lacework of coastline, forming deep fjord-like coves especially on the northern side of the island. Its 20 sq km surface is the permanent home of a thousand inhabitants living in the three hamlets of stone houses in the traditional building style: Katomeri, Spartochori and Vathy.

Spartochori commands the best view, and is built on stony terrain surrounded by greenery, above Spilia harbour. The route from Spartochori to the port is most attractive, and half-way along you can glimpse the Cave of the Cyclops, which has not as yet been explored. 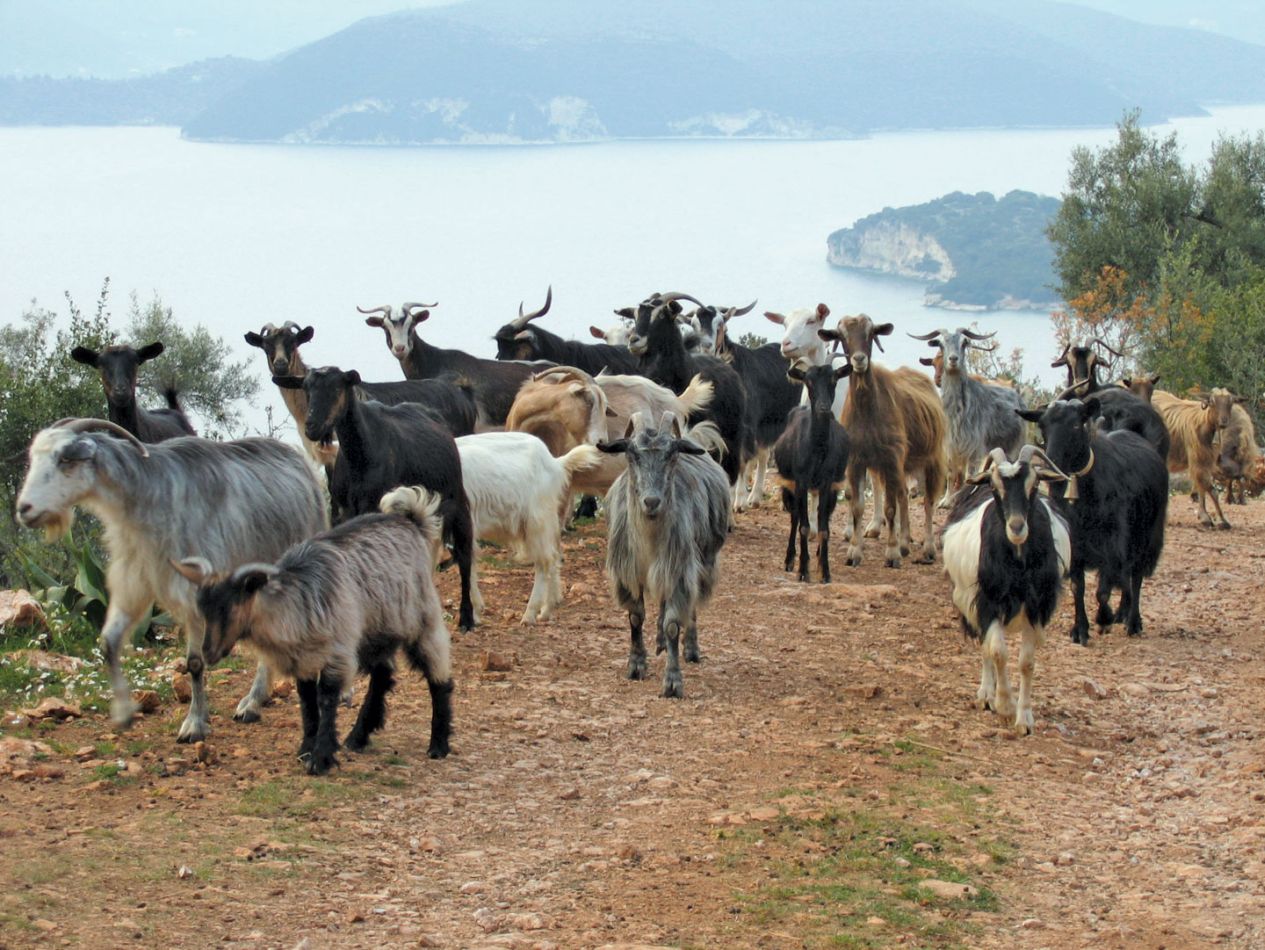 Katomeri lies three km from Spartochori and is a small farmiers’ village with olive groves. Vathy, its seaport, is a delightful seaside fishing village. There are many bays to moor one’s boat on Meganissi and there are grottos on the south-western coast, the most famous of which is Papanikolis' cave, about 30 m deep and with a little sandy crescent of beach at the back end.
According to tradition it was one of the hiding places of the Papanikolis submarine. Other well-known caves are those of Giovani and Demona accessible only from the sea. 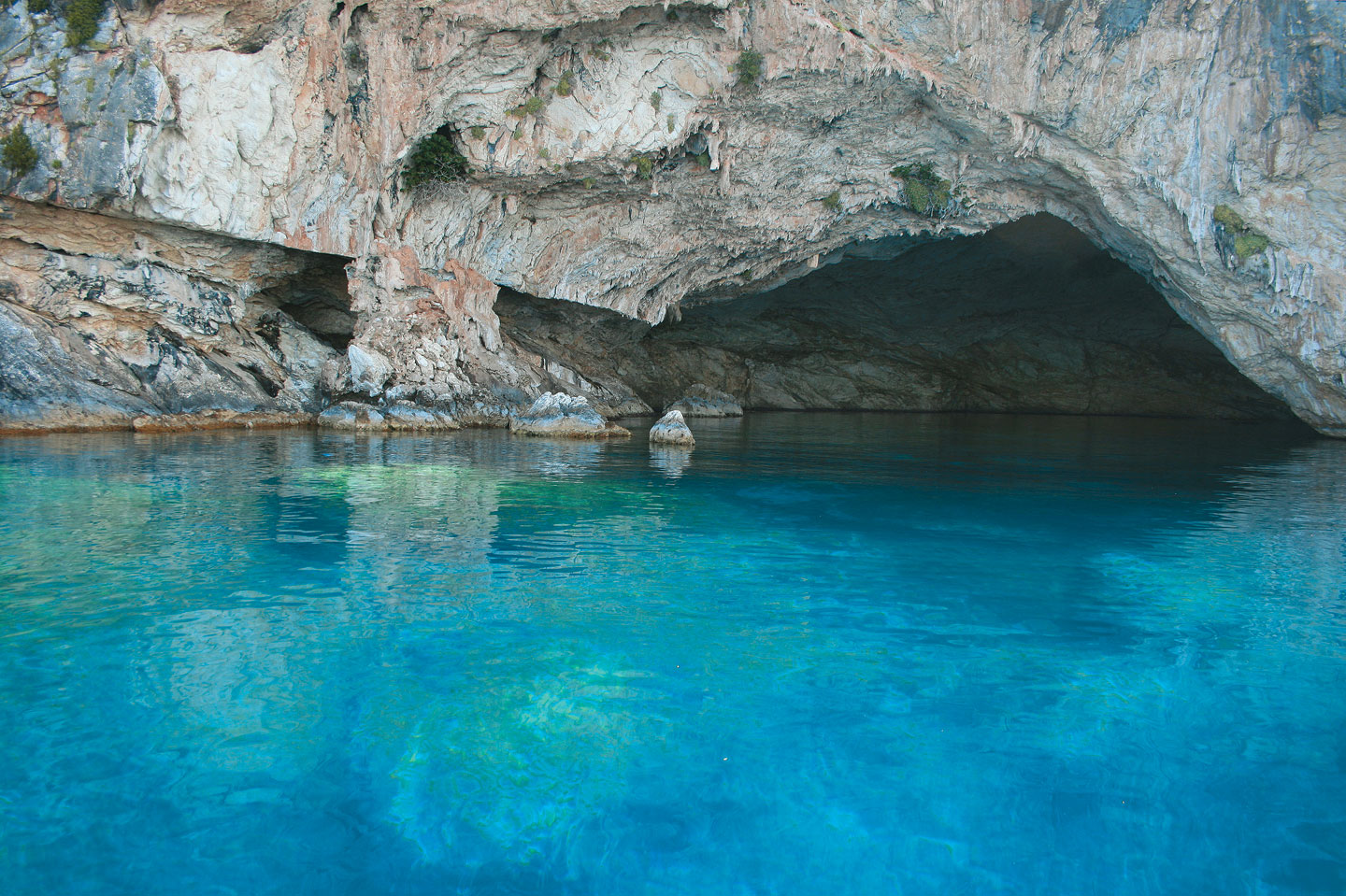 A sight worth seeing is the windmills scattered over the hillsides, that whirred busily in the 19th and 20th centuries. Most stand above the harbour of Atherinos. Also the stone wells with their circular parapet borders, the work of skilled master-craftsmen. Churches and monasteries on the island of particular interest include Agioi Constantinos ke Eleni in Katomeri, Agios Nikolaos and the monastery of Agios Ioannis Prodromos on a pebbly seashore in the west of the island. Nowadays Meganissi is well stocked with tavernas and rooms to let, and has footpaths or little roads agreeable for walks. It is 4 nautical miles from Nydri. 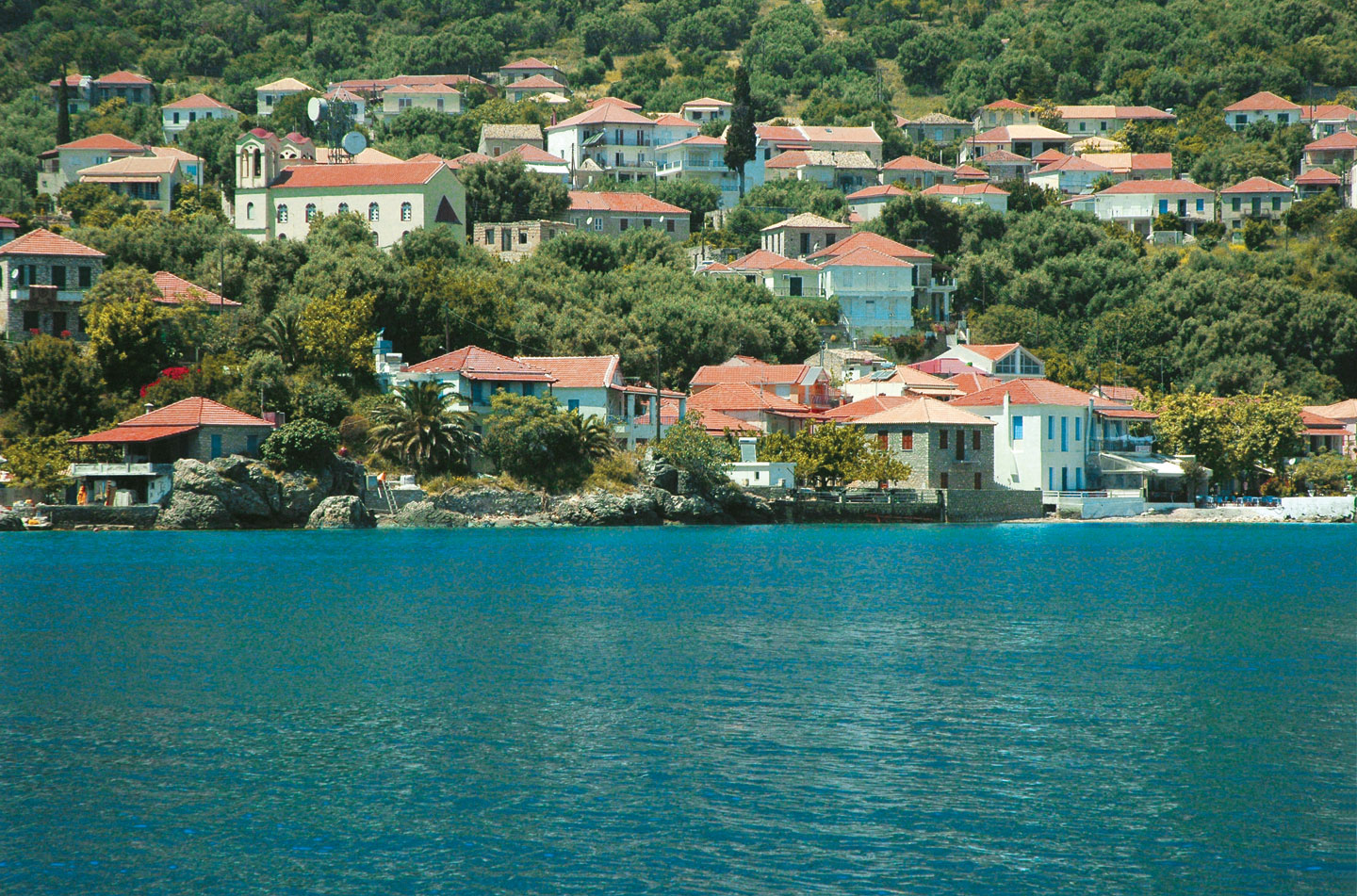 Surface area 20 sq km, the configuration is an unusual mixture of vegetation and rocky outcrops. It is full of every kind of plant: arbutus, bay, olive trees, holm-oak and the famous maritime pine trees which grow amongst the rocks and extend down to the sea. The island’s permanent inhabitants number less than 600. 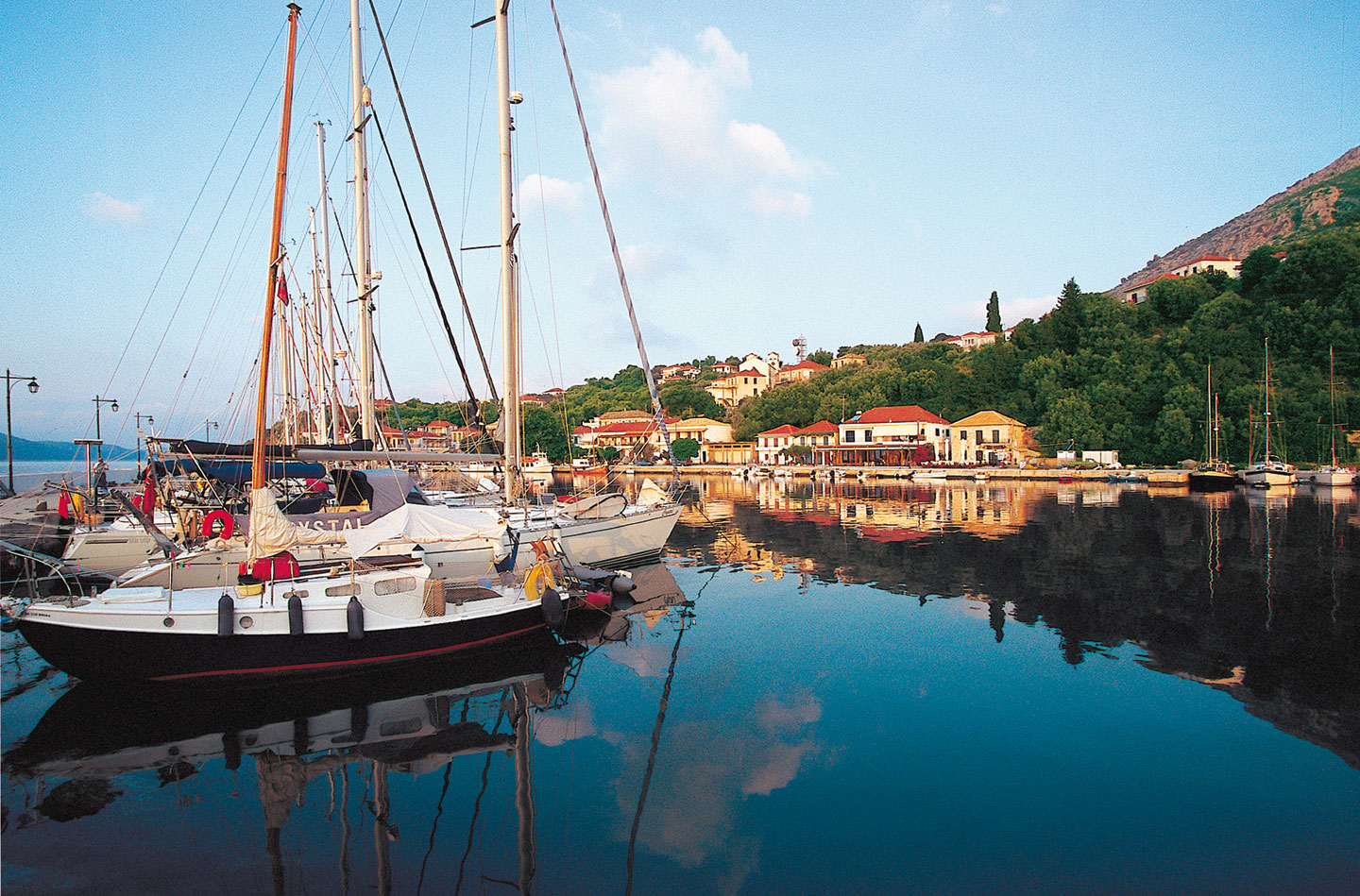 There are four hamlets on the island: Kalamos, Episkopi, Kastro and Kefali and its highest peak is Vouni. Kalamos itself is the picturesque harbour for all sorts of craft, built in a crescent on the side of Vouni. Its stone houses with tiled roofs practically touch one another, leaving just enough space between them for cobbled alleys. The road to Episkopi, which starts at Kalamos, passes through a dense pine forest; it is the second smallest cluster of houses on the island where time seems to have stopped in 1960. There are a few summer houses and a small harbour for boats and caiques. Mt Mytikas in Aitoloakarnania is only 10 minutes away by sea. 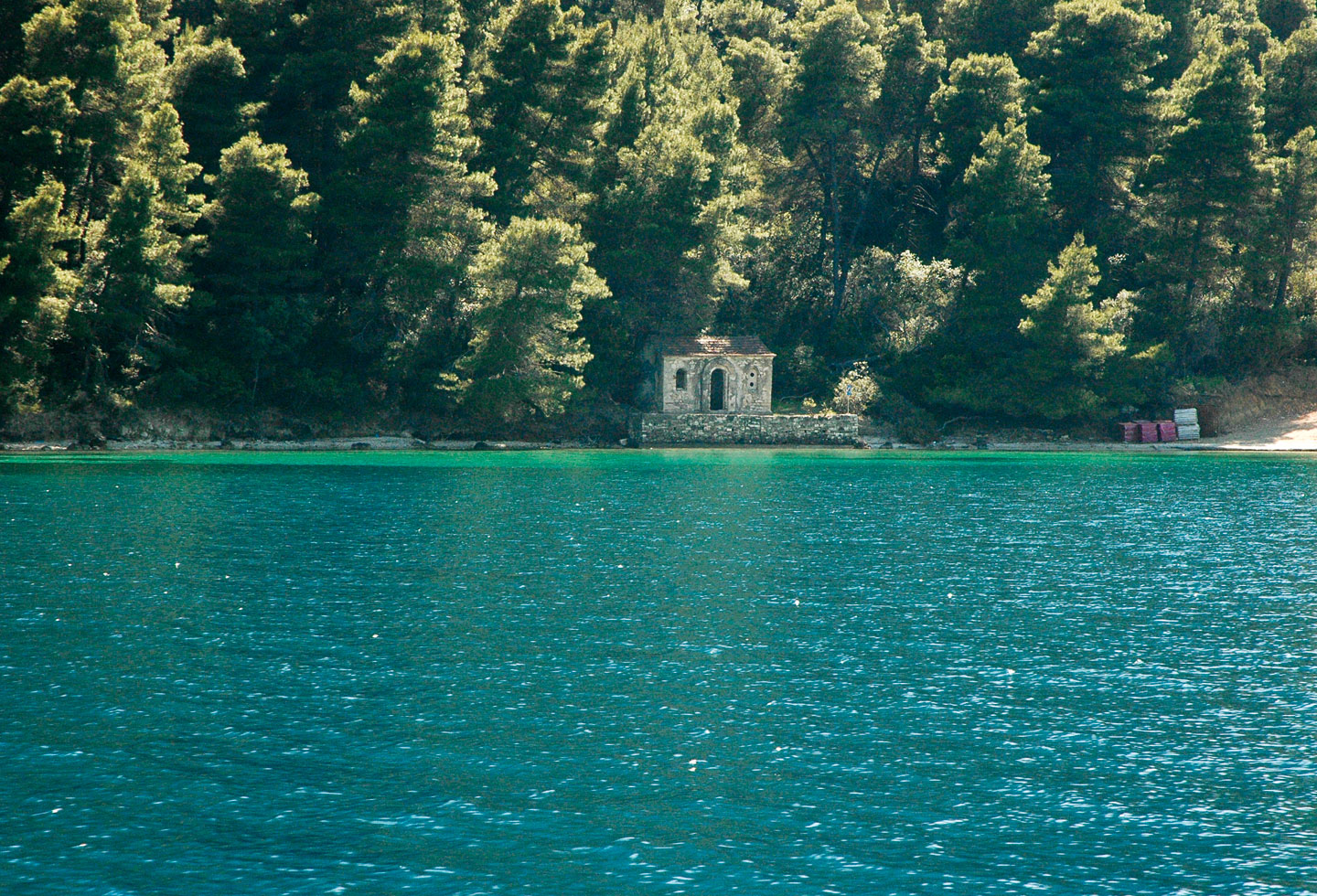 On the route from Kalamos to Episkopi – ideal for hiking – you can make a stop at the small beach of Agios Konstantinos with the church of Agios Donatos (a saint worshipped only in the Ionian Islands). Close to Episkopi, there is the cluster of houses called Kastro with its fortress monastery tucked into trees, possibly dating to the Byzantine era.

Other places worth seeing on the island: chalasma, a niche in the rock on the south side, another of the hiding-places for the submarine Papanikolis in World War II; the islet of Fermekoula in the south-west, which is visited by the monachus monachus seals and the old church of Agios Ioannis and chapel of Agios Konstantinos by the lighthouse. 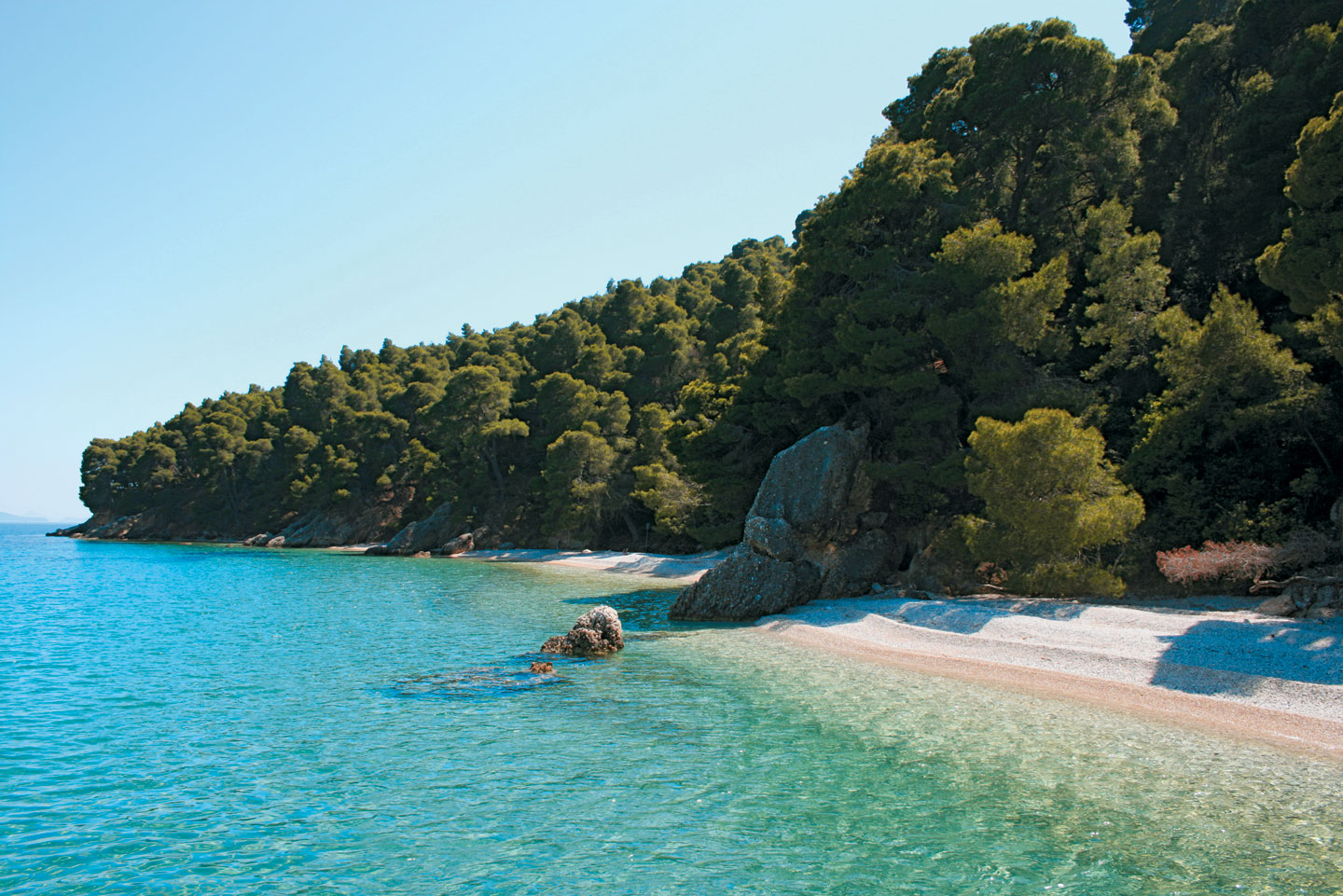 The Kalamos beaches, mainly accessible from the sea, are Myrtia, Asprogiiali, Agriapidia, Pefki, Kefali with its old hamlet, Kedros, Alexaki, Kipoi and Trachilos; whilst circumnavivgating the island, look out for the caves which are also very interesting. 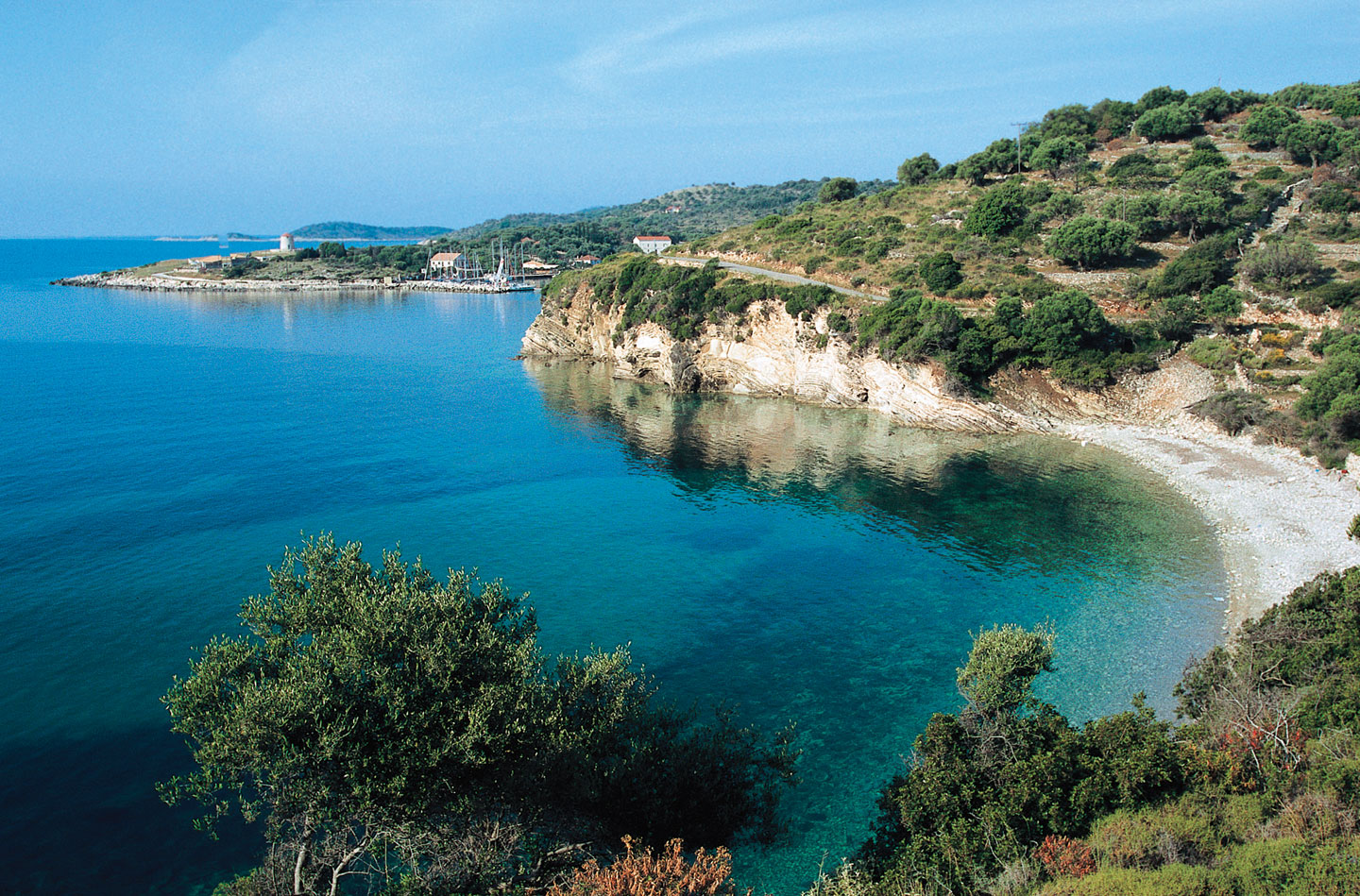 Low hills, indented coastline and olive trees everywhere. Kastos is an ideal place for a safe anchorage and rich spoils of fishing. The sole little village with its stone houses and tavernas is built around the harbour and is home to the island’s 50 permanent inhabitants, a number greatly increased in summer months. Beaches include Ambelakia and Fyki (south); Vali, Kilada, Agios Aimilianos (where there is a grotto called Fokotrypa); Limni, Kamini and Vrisidi in the east which are also accessible by land. The west side is sheer and there are no beaches. However, there is Sarakiniko Bay with a small dock where a boat can moor in a southerly gale. 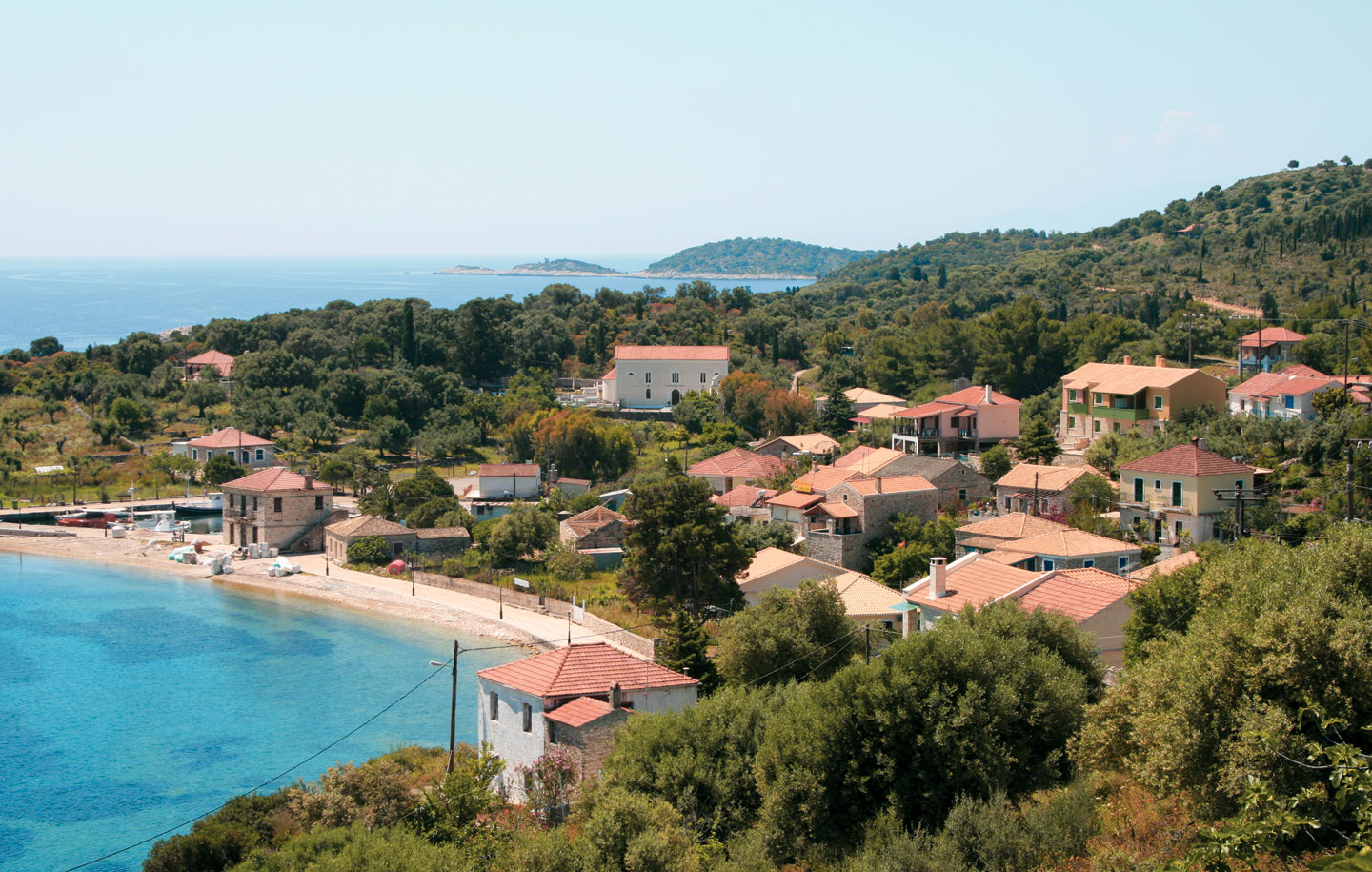 The church of Agios Ioannis o Prodromos is worth seeing on Kastos. It was built in the mid-19th c and has paintings by Spyridon Gazis. Also Agios Aimilianos chapel, the olive grove with its age-old trees in Kalikerimi and the islet Prasonisi (Mangelaria) near the harbour are also worth a visit. 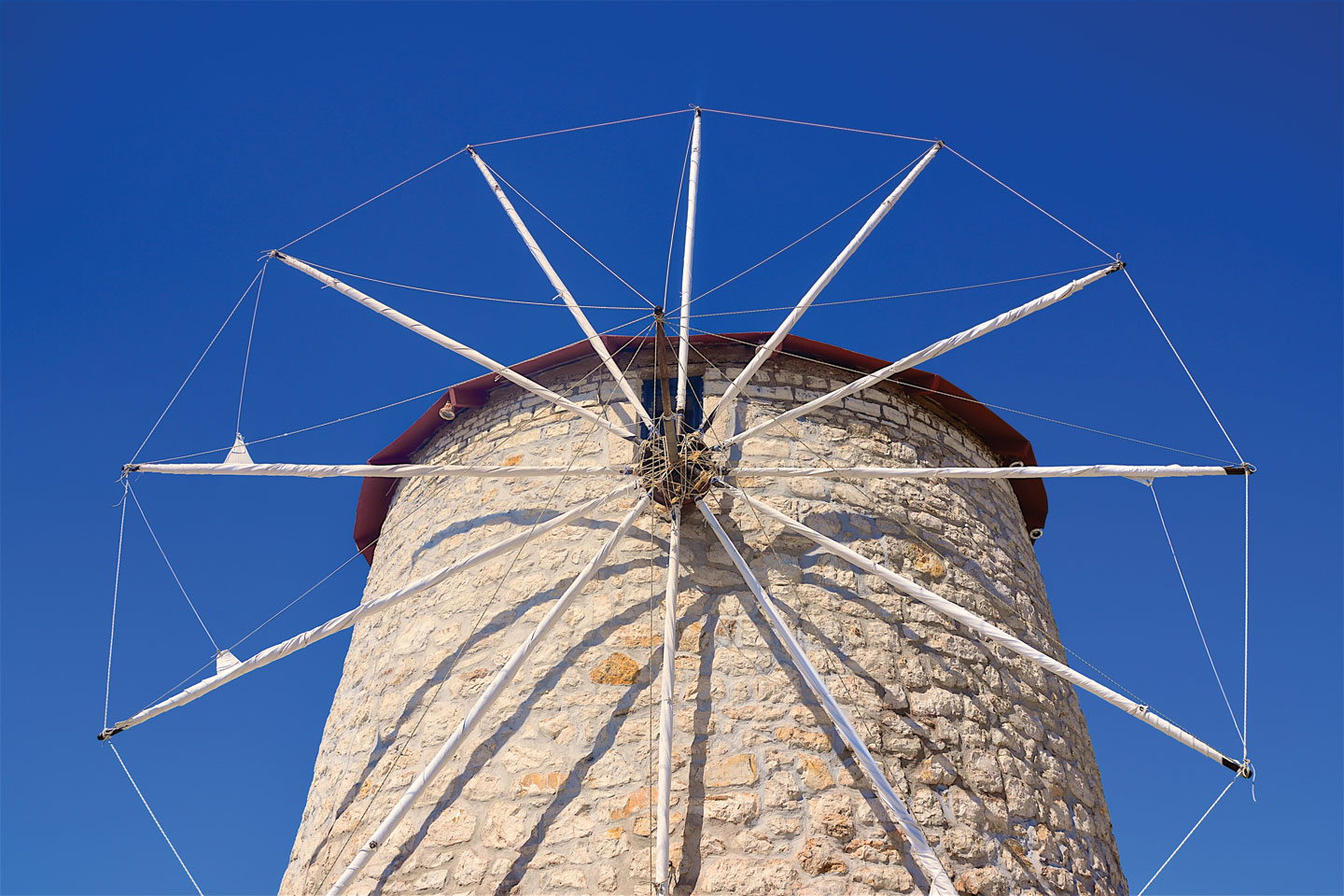 The windmills you see in various places are private property, one of them is considered to be the best preserved on the Ionian Islands: it still has its mechanism intact and operated until 1949. Remains found in Vigla indicate a connection with Meganissi and Kalamos in ancient times. The trip from Kastos to the Mytikas shore opposite can be made by caique.